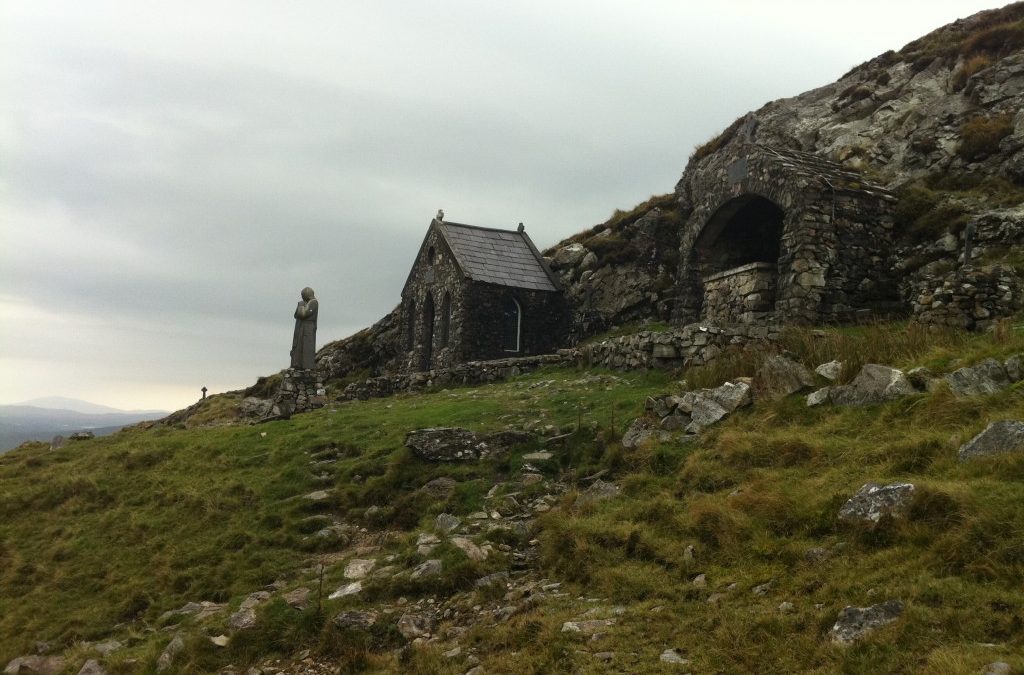 A strange little place in the middle of nowhere, Mám Éan can be reached from three different directions. I chose to ascend from Maam (not to be confused with Maam Cross). To be honest, the word ‘ascend’ is inappropriate here, as the destination stands at a mere 260 m altitude.

Mám Éan (often anglicised as Maumeen, Mamean, etc.) is a little pilgrimage spot at a pass through the Maumturk mountains of east Connemara, roughly between Oughterard and Leenane. A visit reveals a tiny chapel, mass altar and the Stations of the Cross scattered roughly around the rocky, boggy site. I wonder is the chapel the smallest in Ireland. It’s certainly much smaller than the Costello Chapel in Carrick on Shannon, which erroneously claims the title. 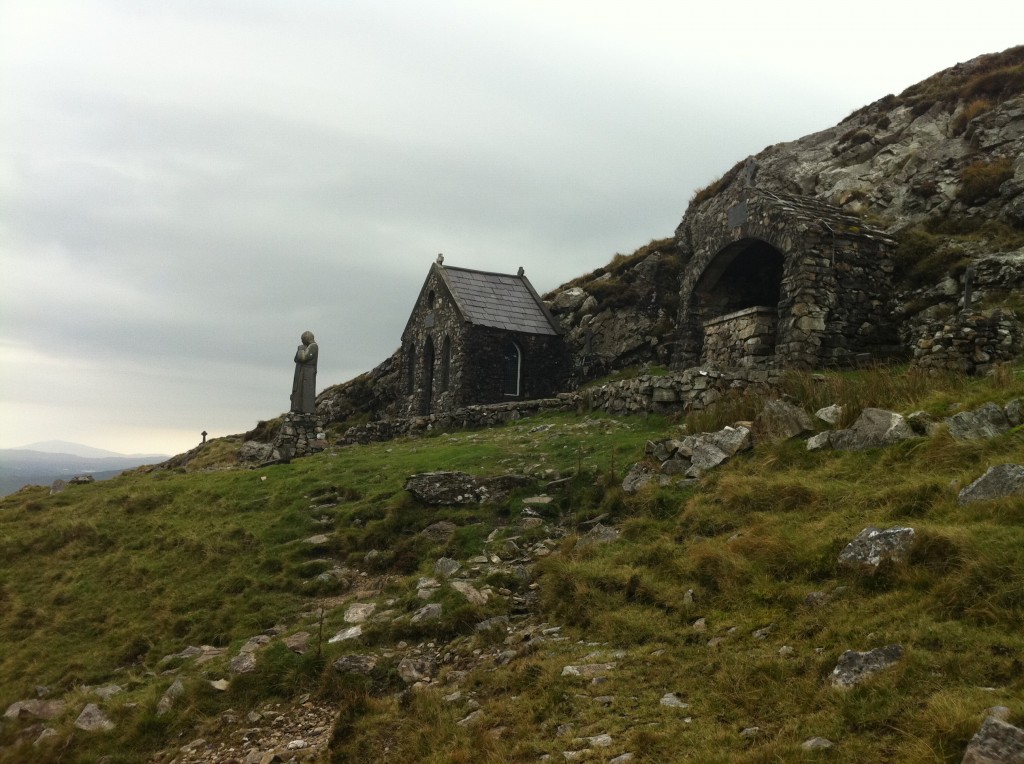 While Mám Éan (The Pass of the Birds) is quite a pleasant spot, with nice views all around, the walk up is rather disappointing. Coming from Maam, the first 5.5 km are on tarmac. As if that wasn’t tedious enough, the next 1.8 km consist of an even worse recently bulldozed sand and stone track that has been bludgeoned across what would have previously been lovely mountain bog. Only when this track eventually peters out is there any feeling of being in the mountains of Connemara (for 1.0 km). Once here, the mist, ever rolling in and out, adds to the atmosphere.

Descending the other side from Mám Éan is a more rewarding experience, on what might be termed a naturally eroded (sic) 1.7 km long track, quite like the one up the Reek. At the base of this track, you can exit the area by a narrow tarred roadway south or north (hence the three accesses referred to above). I chose to head 6.5 km north, up towards Lough Inagh, where I had left my bike earlier that day.

I walked beneath the superb Maumturk mountains on my right-hand side, with their steep western walls shining in the autumn light. Beyond, to my left and across the valley, loomed the wonderful Twelve Bens. A donkey accompanied me along for a while, like a big pointy-eared dog. He took my sandwich and my mind off the tarmac.

Shortly, I would mount the bike and cycle the long 29 km back to Maam and my car. This was tough, I have to admit. It seems that whenever I choose to walk from A to B and cycle back to A, the wind is in my face for the hardest stretch of the return journey. Like a sick joke, the winds seem to gather wherever I started out walking, loiter around and then hit me head-on like a convoy when I’m cycling back later. For good measure, they throw in some classic West of Ireland horizontal rain ….

With 73% of this walk on tarmac, it is, to misquote a well-known TV pundit, “a good walk, but not a great walk”.