On Friday last, I tweeted the following :

I was out walking around the lakes in Kerry, under the cover of mostly oak trees. When I emerged from beneath early summer’s developing canopy, I looked up to see a pair of magnificent White Tailed Eagles soaring up in the thermals above my head. It was a beautiful, sunny, dry and warmish day. I lay down on my back on the forest track and had a wonderful view of these magnificent birds through my binoculars for quite a few minutes. They were huge – we’ve all heard they’re called “flying barndoors”. I had seen eagles before in France, Spain and Poland, but nothing as big as these guys, and to think they’re possibly still immature. Had they even grown to their maximum size ?

After a while, they disappeared over the nearest mountain and were gone. A little later, one of them reappeared on my side of the hill again, but a little further away.

Now I decided that I would visit Clare on the way home Saturday to see the nesting pair on Lough Derg. Unfortunately, I ddin’t manage that, as I ran out of time to swing by and witness what would have made for a perfect White Tailed Eagle Weekend down south. Anyway, I was going to “die happy”, so it was no big deal and I thought I would surely get down there at some point over the coming weeks **. 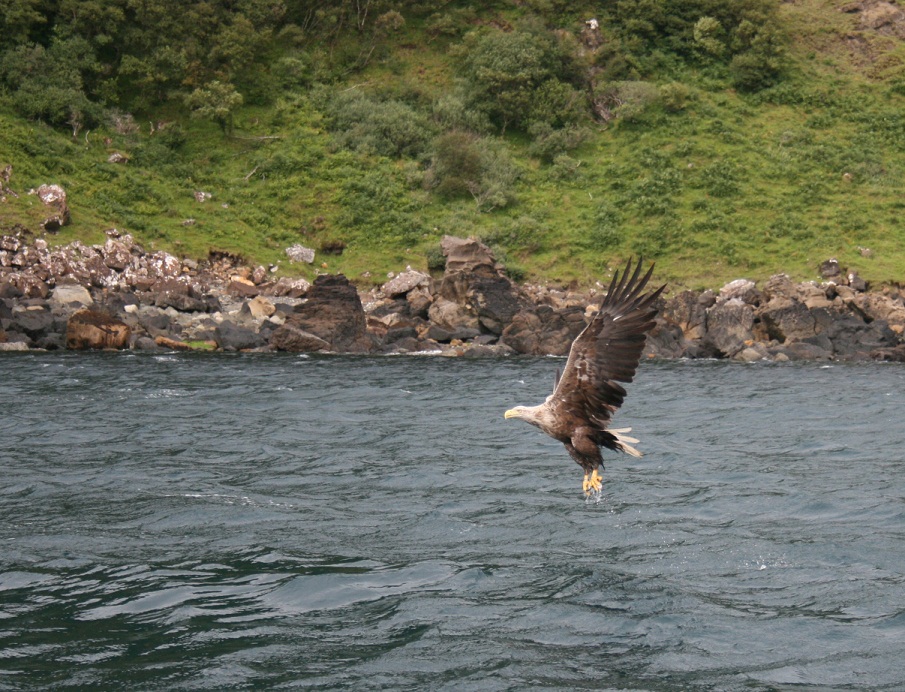 Die happy ? I’m afraid I didn’t even end the weekend happy. Back in Mayo on Sunday, I was told that “our” White Tailed Eagle, Lochlann, had been found dead near Castlebar.

Lochlann (“Place of the Lakes”, a name of Viking origin) liked Mayo and its lakes, big time. He first came here at the end of April 2011, spent almost all summer 2011 here, with the odd foray into Galway and had returned from winter roosting in Kerry at the end of March for this coming Mayo season.

Last summer, I spent three full 8-hour days out in the mountains looking for Lochlann. In addition, I spent god-knows-how-many sets of 1, 2, or 3 hours trying to spot him, when on the way to or from somewhere up in the wilds of west Mayo. I’d check out his satellite fixes on https://www.goldeneagle.ie/, which are time-delay released (three days later) and discover he was maybe just 500m from me on such-and-such a date. Alas, I never got to see our very own White Tailed Eagle.

It is beyond my comprehension how a person could poison or raise a weapon, point it and deliberately shoot such a magnificent creature of our shared planet. But the fact that I can’t fathom such actions is not what is important. What is vital is that it become incomprehensible to the type of person who actually did this.

What is required here is education. People like the person who did this need to be educated. The Irish Farmers’ Association and other rural bodies should play an active role in educating people about these magnificent birds and the level of threat (or lack thereof) they pose to livestock.

The people who work on these projects are undoubtedly wonderful. I am terribly sorry for them and the obstacles they seem to so regularly be confronted with.

Here is what I think must be done.  NPWS, together with the IFA and other rural organisations (what about Leader?), should get Norwegian, Welsh and Scottish farmers and other rural dwellers, who live with these magnificent birds in their countries, in to talk to Irish rural communities and farmers. Get them to tell the Irish what, if any, threat is posed by eagles and other birds of prey. Brand the events “IFA”, not “NPWS”, for greater buy-in.

Do it now, before any more are needlessly slaughtered.

Two years ago, Conall, a Golden Eagle, was poisoned up in Leitrim. I blogged angrily about that here.

** Today, May 18th, I read that the nesting effort at Mountshannon has unfortunately failed. However, those are young birds and hopefully they will find success in 2013 or beyond.

Measuring up to 95 cm in length and with a wingspan up to 245 cm, the White Tailed Eagle is a massive bird. Also known as the Sea Eagle, or indeed the White Tailed Sea Eagle, it is the largest raptor of northern Europe. Ireland’s reintroduced birds were donated by Norway, which boasts the largest population in Europe. These eagles mostly eat fish, small mammals and other seabirds.