What Now for the Wild Nephin Farce? 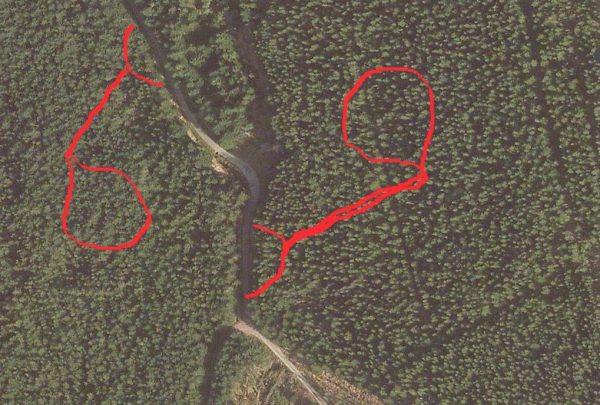 Coillte has exited, so what now for the ‘Wild Nephin’ farce?

Farce (n); a broadly humorous play based on … improbable situations; a ludicrous situation or action. [Collins]

And so, just 8 years on, Coillte has exited stage left.

Back in December 2009, Coillte’s internal Project Scope Document noted that Wild Nephin would provide “a real opportunity for Coillte to lead the way in a landscape scale transformation (and management) of lands”. The document further enthused that, thanks to its “considerable competencies in habitat restoration [and] its major land ownership in suitable areas”, Coillte had the potential to contribute to a response to the European Parliament’s call on member states to “look at setting aside lands as wilderness or ‘restoring’ lands to primitive qualities”. Indeed, one of the project goals was to “enhance Coillte’s environmental and social credentials”.

While it departs without having achieved anything of the sort, unfortunately the state-owned forestry company would appear to have managed to leave one tentacle inserted, apparently simply leasing the land to the NPWS, rather than selling it lock, stock and barrel.

Perhaps this might have something to do with the approximately 260,000 non-native conifers it has planted on the site over the last 3 or 4 years. One day, they might just want to harvest those trees. Heck, if they once more conveniently forget to seek a derogation from the Forest Service, sure they could re-plant conifers again thereafter. {1}

So, what now for the Wild Nephin farce? Here’s what I believe will happen over the coming years. Naturally, it’s only my opinion …

First, nothing will be done about invasive rhododendron, because the NPWS presumably doesn’t have the manpower, cash or equipment to do anything about it. Unless, that is, my suggestion below is taken up. Coillte would have had the resources, but never the interest. {2}

Second, having re-planted all the non-natives, the forestry company will indeed come knocking on the door in the future to harvest them. They will, presumably, be accommodated.

If you try to mix a timber harvesting, land owning monolith like Coillte with conservation, then sincerity and commitment are unlikely to be among the ingredients.

In a statement, Coillte said that the removal of forestry has focused on “opening vistas onto the mountainous terrain and lakes” as well as improving boundaries between forests and adjacent open land and preparing areas for bog and riparian zone restoration.
“Forest regeneration, supported by tree planting, also aimed to encourage natural regeneration and harvesting activities which took place fitted within the overall objectives of improving landscape and habitat quality,” the statement continues.

In an article in the Irish Times earlier this month (Jan 2018), Michael Viney wrote that “some forest roads have been narrowed into backpacker trails”. I’m not aware of any that have. He notes, in what I would consider quite the understatement, that the “10- to 15-year conversion planned for Coillte’s forestry has been slow to get under way”.

Not wanting to bore the reader by once again going over the details, suffice it to say that this area is now less wild than it was prior to this ‘project’. You can find such details in this previous post from 2015.

We have a deep-rooted problem in Ireland with spin regarding the environment. I’m not sure what the reasons are. Does it have something to do with the almost total ignoring of the natural world in our primary and secondary school curriculums? Is it a legacy from the imperial days, manifested in an attitude of “now that we have possession of the land, we can abuse nature as we wish”? Is it the traditional man-is-superior-to-beast doctrine of the organised religions? Is it because of our inclement weather that people don’t interact with the outdoors much and are, therefore, oblivious to it?

So, what should happen now, if anything is to come of this joke?

Here are some suggestions :

Allow all local landowners and those with commonage and turbary rights within the area bounded by the bothy at Letterkeen – Keenagh crossroads – Bellacorick – Bangor Erris and down the spine of the Nephin Begs to harvest non-native trees for their own consumption only over the next, say, 100 years. With the sole exception of the nice Monterey Pines just beyond the bothy. But with two conditions. First, that all turf cutting within the same boundaries be 100% abandoned forever. Second, that the method and precise location of extraction be dictated to them by NPWS, e.g. using what I call the ‘waterdrop’ method to create open spaces within the plantation to allow in light and break up the stands. See image below. {3}

Remove immediately the 260,000 newly planted conifers, or let the ruminants in at them. Failing that, certainly don’t allow Coillte or any of its harvesting contractors back on site ever.

Remove all fencing, other than that which surrounds the pathetically small native tree stands and increase the number and variety of such stands.

Stop the building or installation of any further huts, shelters or other structures and let the ones in place rot over time (my personal preference would be to remove them immediately).

Ban the reinforcement of any existing tracks and the creation of any new ones.

Block all vehicular access, other than to locals only for the removal of felled timber under the conditions outlined above.

Restore the natural levels and behaviour of water on the site, by blocking artificial channels dug over the decades.

Research the viability of introducing red squirrel and/or any other native species that can be shown through proper ecological research to be capable of establishing viable, sustainable populations.

Over to you, NPWS,

Coillte hid behind the Forest Service requirement to re-plant conifers where conifers have been felled and used this as its excuse for having re-planted conifers well after “Wild Nephin” was announced to the public back in 2013. This is bogus, because with both the People’s Millennium Forests of almost 20 years ago and the EU-Life Restoring Priority Woodland Habitats project of almost 10 years ago, they did not re-plant conifers where they had been felled. In other words, where there was a will, there was a way…
https://www.millenniumforests.com/about_intro.html
https://www.woodlandrestoration.ie/demonstration-sites-clonbur.php

Regarding Tourmakeady, one of the People’s Millennium Forests, Coillte stated that “rhododendron and laurel will be eradicated as they are invasive non-native plants.” This never happened.
https://www.millenniumforests.com/locationsite_tourmakeady.html 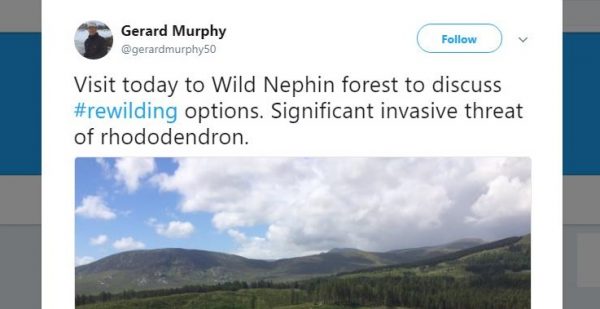 What I call the ‘waterdrop’ method involves removing some trees alongside tracks in a roughly semi-oval fashion to break up the wall of trees that is so typical of conifer plantations, then enough to create a ‘corridor’ a few metres wide into the deeper forest, then felling in a waterdrop shape within. Apart from allowing in light and breaking up the stands, this could also contribute to increased windfall of trees. 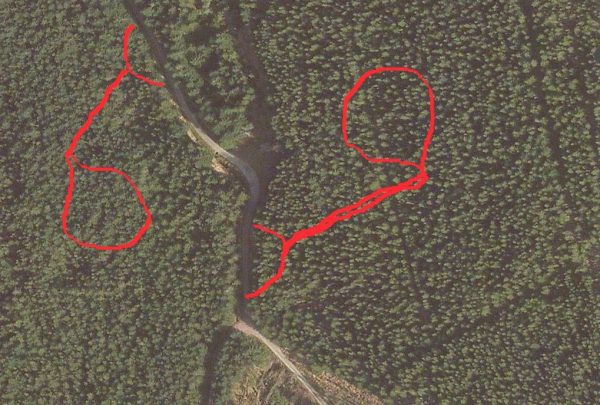