December saw me take on three good hikes in the off-season.

I had a specific reason for revisiting The Bangor Trail from the Bangor end on Dec 21st, the shortest day of the year. While on ‘The Walk of Hope’ with the fabulous people of Foxford Ramblers Walking Club the previous Saturday, two companions from Bangor had told me of works being carried out on the Trail that they weren’t at all happy with. I just had to investigate, fearful of another example of environmental vandalism by public bodies. 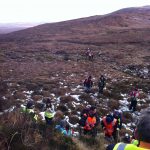 The Walk of Hope, with Foxford Ramblers Walking Club

But first, back to Foxford. Jim Murray and his colleagues had organised a charity walk for Sat, Dec 17th, in aid of Hope House in Foxford. It was an excellent 16 km walk over the lowish Mayo foothills of the Ox Mountains, from Bonniconlon back to Foxford. Towards the end of the walk was a superb wetlands area, with rushes, streams and three small lakes I need to re-investigate some time this year.

The walk was led by Taoiseach, Enda Kenny and we had lovely weather, save for one rough enough hailstone storm. A good 80 walkers took part and it was most enjoyable. Find out about Hope House here and Foxford Ramblers Walking Club here. A great day ! 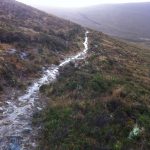 The following Wednesday, I hiked from Bangor to the Tarsaghaunmore River on The Bangor Trail and back (8 km one-way). On the day that was in it, I knew I wouldn’t get any further by dusk and didn’t really fancy hiking after dark. All was going swimmingly until near the bridge, where I discovered the work to which the Bangor people had referred.

A bit of history : a number of interested parties, including NPWS and the local Leader company, had attended a meeting in late 2010 to discuss what should be done about the waterlogged nature of much of The Trail. I was decidedly on the “leave it alone” side of the discussions. My understanding of the outcome of this meeting was that only streams crossing the Trail would be boardwalked and / or drained and the remainder left as is. Instead, what I saw in December was both boardwalking and drainage work where there is no need whatsoever for either. Or to put it another way, if they deem work necessary on that section, then they’ll deem it necessary almost anywhere. The fear now is that this type of work will be carried out way in excess of what is required, threatening to ruin the uniqueness of this place. 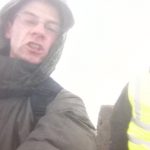 Between Christmas and New Year, I joined my brother-in-law for a hike up Wicklow’s Lugnaquilla, Ireland’s highest mountain outside Kerry. We came from the Glen of Imaal side, heading up by Dwyer’s statue. The walk (6.5 km one-way) was really easy, taking just under 2 hours to the 925 m high summit. It snowed on us for part of the hike and we unfortunately had no view when we reached the top.

It’s a hike I must try to do again this summer, but from the more difficult eastern side, because the Glen of Imaal approach is just a walk up a not-very-demanding slope. Indeed, many Mayo or Connemara mountains, of only 500 m height demand much more physical effort than this did.

She took and kissed the first flower once

and sweetly said to me :

‘This flower comes from the Wicklow hills,

dew wet and pure’, said she,

the strongest flower of all.

But I’ll keep it fresh beside my breast,

though all the world should fall.’

All said, an excellent December to finish off 2011. Now for 2012. Get in touch if you’d like to join one of my guided hillwalking weekends in Mayo.