The Pursuit of International Scale

Back in June of this year, while speaking at a tourism conference, I outlined my dream of a great 100 km long “Nephin Beg Mountains Loop” – a single continuous, entirely off-road track for cycling and walking that would circumnavigate our beautiful and wild west Mayo mountain range. Complimenting this loop would be the already in situ Bangor Trail, for serious walkers only, which would cut the loop in half for choice of route. See my previous post, with map, here.

However, that 100 km loop is really only one part of what I believe could be provided in Mayo, to bring this county up to genuine international scale as a walking and cycling destination. The recent unsurprising decision by government to scrap the plan to extend the Western Rail Corridor northwards beyond Athenry reinforces my belief.

On the (from a tourism development viewpoint) much maligned eastern side of Mayo, we have the disused Claremorris to Collooney (Co. Sligo) railway line, part of the famous Western Rail Corridor. This line, at 76 km long, will doubtless never be reinstated for use as a railroad. To the south of Claremorris are the remains of the old branch line down to Ballinrobe, 22 km long. Ditto for its future as a railway. To my knowledge, only 1 km of that line has become a road surface, with the remainder through predominantly farmland. Together, these two track beds could get a cyclist or walker from just south of Sligo town to Ballinrobe, on the shores of Lough Mask in south county Mayo – off road! That’s a distance of around 100 km. 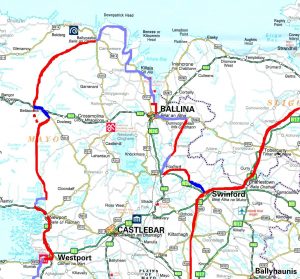 RED DASH = WHERE THE ROUTE COULD EASILY BE TAKEN OFF-ROAD

Ballinrobe is just a short 11 km hop from the beautiful forests at Cong and Clonbur, where a further 10 km of off-road tracks already exist (more, if you include the gorgeous local loop trails by the lakes).

From there to Westport (79 km) would admittedly use 45 km of roadways, but minor ones. Using the 10 km long Seanbhóthair between Clonbur and Cornamona, then the 24 km of off-road sections of the Western Way would give a total of 34 km off-road. This part of the trail would take the walker or cyclist along the edge of the magnificent Lough Corrib and by the lovely Sheaffry Hills to Westport. Indeed, this south Mayo stretch of The Western Way could hopefully be taken much more off-road. This work has already begun.

Now we’ve reached Westport from Collooney, a distance of some 200 km, with around 144 km off-road and 56 km on small and minor roads.

As we know, the off-road Greenway already exists from Westport quay north through Newport and Mulranny to Achill. Leaving the Greenway just north of Newport, you could turn inland, on very minor roadways for 7 km and then take The Western Way all the way to the north Mayo coast, at Ballycastle and the Céide Fields. There are just 8 km on-road, which could relatively easily be converted to off-road by the local authorities. 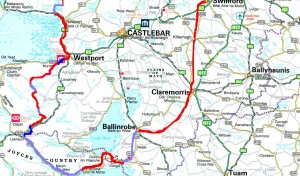 To Ballycastle, this would give a walking and cycling trail that would be a total 281 km long, with just 71 km on-road – and virtually all very minor roads at that. That’s 210 km of off-road cycling and walking !

The final piece in the jigsaw would be to join Ballycastle, on the breath-taking north Co. Mayo coastline, taking in the superb abbeys at Moyne and Rosserk, back down to the old railway at Swinford, using minor roads via Ballina and the low Ox Mountains, plus The Foxford Way.

Total other, larger roads : approx. 16 km (8 km of which could be quickly taken off-road)

Mayo is in a pretty small country. However, ours is a very large county and we have the real opportunity to produce a (mostly) off-road walking and cycling experience that would actually be of international quality length. Beginning with my proposal and with vision from the local authorities (who are already doing great work here), we would then have the motivation to get ever more of this potentially fantastic trail off-road, until, one day, it all would be.

What, there’s more ? Yes there is.

This trail would have four rail access points directly on it, at Collooney, Claremorris, Westport and Ballina. Also, just imagine what this could do for small tourism providers, local food producers, artists and craftspeople, traditional pubs, etc., along the route – particularly in the more remote areas. Now that’s sustainable tourism.

Check out the Sligo Mayo Greenway website, which proposes the conversion of the Collooney to Claremorris rail line.