Tales from the GR36 Walking Route in the South of France 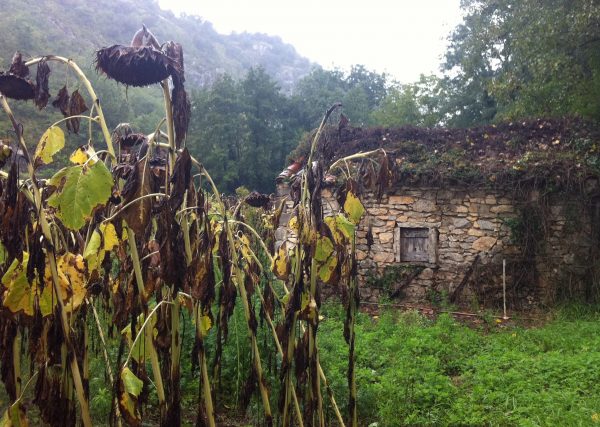 Tales from the GR36 Walking Route in the South of France

Marie d’Arles smiled out from beneath her poncho. Despite her petite frame, she was no lightweight. Marie was undertaking the full 752 km Via Podiensis, all the way from Le Puy to St. Jean Pied de Port, at, as she put it, “20 km par jour”.

It’s early autumn and the glorious walking tracks of France are empty. These extraordinary routes are not like our local walking loops, where the vast majority of people are out for a one-hour stroll. These are great linear pathways, where the only hikers are either enjoying a walking tour for pure pleasure or are dedicated to the impressive goal of one day reaching Santiago de Compostela.

We had a nice chat, me explaining to her how I lived for four years just up the road from her beautiful hometown of Arles. We joked about the local festivals I spent years attending, but this wasn’t a day for standing around too long. As we parted, I glanced over my shoulder at her, jealous of the mammoth undertaking she was clearly enjoying.

The poncho-wearing weather had curtailed our meeting. Constant rain accompanied us that day. Not that it could dampen the spirits of those who trod these gorgeous tracks. Any Irish person indifferent to the charms of km after km of oak-dominated native, mixed and healthy woodland would need a zap of the nearest defibrillator.

It was l’écureuil that welcomed me back to the big river, by pausing half way up his tree so we could have a good look at each other. This typical red squirrel behaviour afforded me the chance to note how dark his coat appeared, compared to that of his Irish cousins.

Les tournesols stood like sentinels to a lost leader. Drooping, blackening, falling, rotting; they looked like they were waiting for a harvester who had forgotten to come. In fact, sunflowers go brown / black before being harvested, although whoever had the job of gathering the seeds here was clearly a little late. The birds had already eaten half of them. 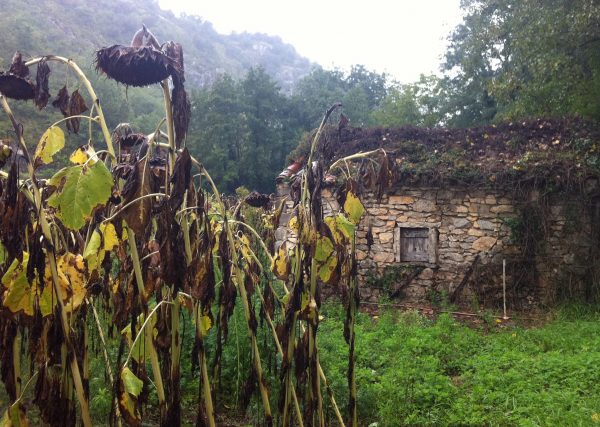 The sweet corn just across the narrow little-used road and the vines further along looked the same, as if they too had been neglected. The once luscious red grapes looked like they were definitely past their “best harvest” date. 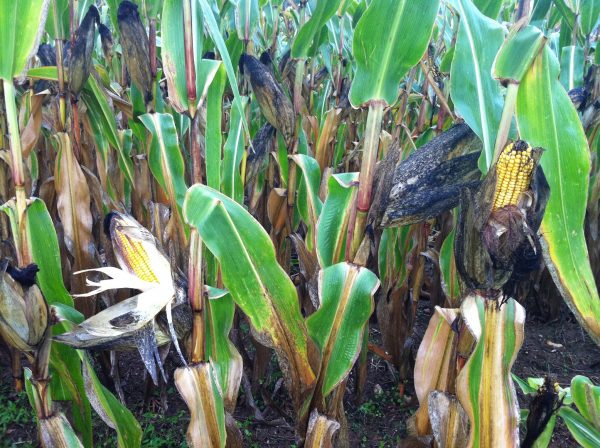 Rural de-population is a huge issue in France, certainly even more so than here in Ireland. Today’s youth equates “la France profonde” with the older generations living in tiny villages with few services or none.

Register your interest in joining our walking week here.

The southern French raptor population is in a far more healthy state than its Irish cousins. While at home a sighting is still a special occurrence, immediately followed by a crushing fear that some other less benign observer may have laid eyes (and crosshairs) on the magnificent bird, in the south of France these beauties are commonplace.

Today, we were restricted to enjoying their evocative calls from deep within the oak forest. With rain falling, no self-respecting buzzard, kestrel or kite would bother to open his wings and rise out of the branches. Still, even their sound is a treat and reminds me that there are plenty more magnificent creatures on this earth than us humans.

Neither the sky nor the earth belongs to us.

Here’s a nice webpage about birds of prey in France (English language).

Tales from the GR36 walking route

If these simple little tales from the GR36 walking route inspire you, or you’d like to create your own, then why not join our small group walking holiday to this wonderful part of France during May each year.