Hidden in the middle of one of Mayo’s countless conifer plantations lies one of the true jewels of the county. Lios na Gaoithe (The Fort of the Wind) is a large ringfort constructed sometime from the late Iron Age to the early medieval period. Scholars now tend to lean towards the latter being more likely as the period of ringforts in Ireland (500 to 1,000 AD).

Standing at a maximum of almost 4m from bottom of ditch to top of enclosure bank (see picture, below) and forming a circle of roughly 26m diameter, this structure has a circumference of around 82m. It would originally have had wooden stakes placed vertically around its perimeter, probably for keeping animals within and predators without. Note that present-day opinion is that ringforts were unlikely to have been in fact ‘forts’, in the sense that they probably did not serve any real defensive purpose. They were not constructed particularly high above the surrounding ground level and a ring of stakes might not have kept any would-be attackers at bay for very long. They were more likely to be status symbols of local chiefs or powerful clans, perhaps representing their control over surrounding lands. 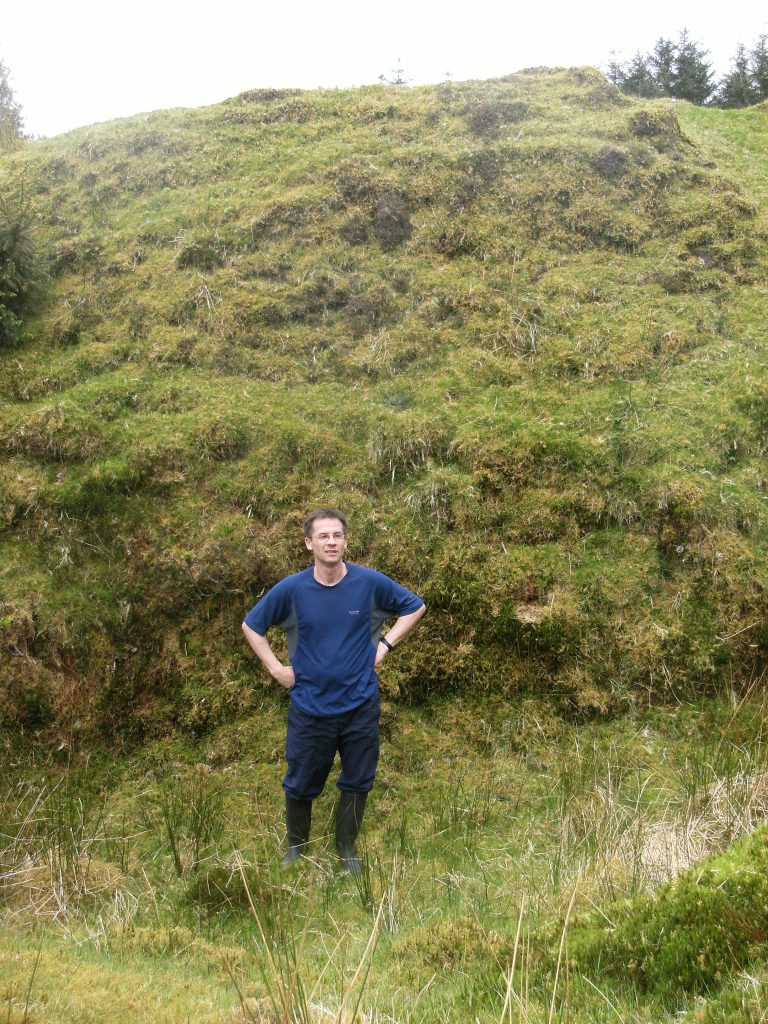 Standing in the ditch at Lios na Gaoithe

Lios na Gaoithe was excavated in the 1950s and among the findings discovered was a cist, a burial construction made of stone slabs arranged in a box-like shape. Coloured glass beads were within, along with the bones of the deceased. How blue glass beads came to be in a West of Ireland ringfort is a matter of conjecture – some have suggested they may have come from as far away as north Africa, maybe via numerous trading posts along the way.

The ringfort is the most common remaining ancient type of homestead in Ireland – there are estimated to be around 40,000 of them dotted all over the country. They consisted of a raised mound within a sunken ditch and an elevated outer bank. Indeed, sometimes there are more than one ditch and associated bank, the latter built of the material removed in order to dig out the former.

An entire earthen ringfort is called a ‘ráth’ and the dwelling enclosure within the ‘lios’, although in the case of Lios na Gaoithe, the latter term has come to refer to the whole. Were it made of stone, the structure would be known as a ‘caiseal’ or ‘dún’, such as the famous Dún Aenghus of Inis Mór in the Aran Islands.

Interestingly, ringforts are often built in prominent positions and / or on good quality ground. Today, however, neither of these attributes applies to Lios na Gaoithe, located as it is in classic Mayo boggy terrain. Having said that, it does command a strong (though not elevated) position in a valley running from northeast to southwest through hilly terrain and is close by a small river. 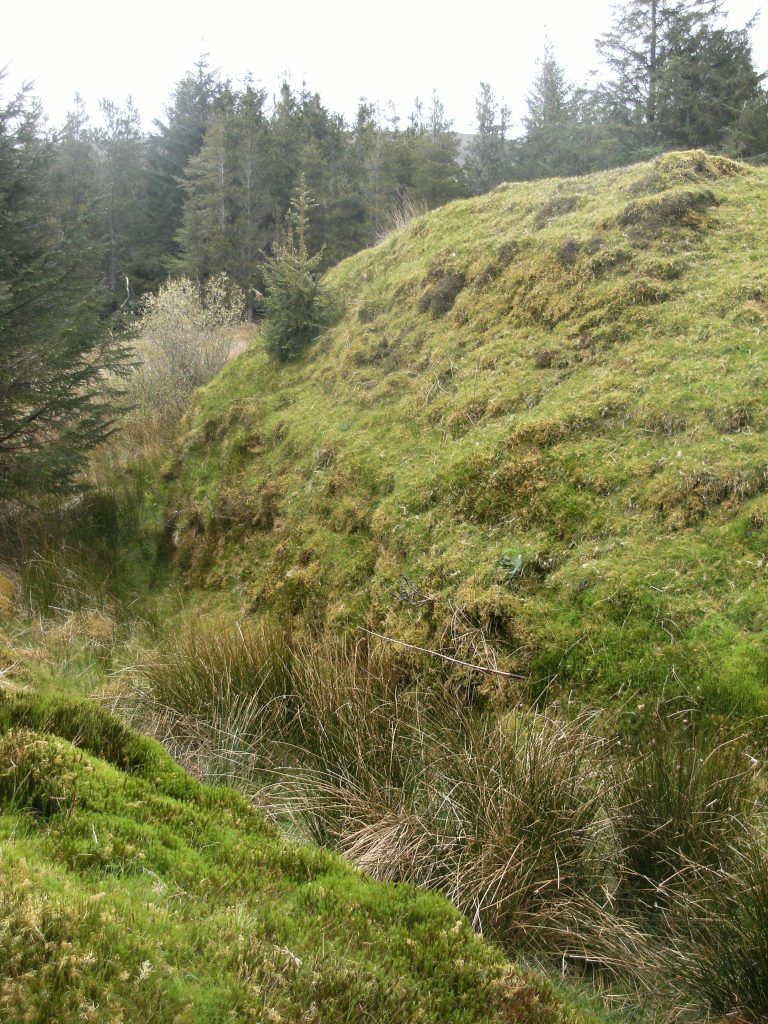 Looking into the Ditch

My map below shows the location of the fort in relation to the landscape around it. Areas coloured brown are at 200m altitude or above, while the green areas are at 50m elevation and lower.  You can see two entrances into this terrain from the north, marked A and B. Entrance A comes from what is today a vast open, low-lying bog. This is very wet, inhospitable country and, even 1,000 years ago, unlikely to have been much crossed by men on horseback or foot. Entrance B carries a track today and keeps relatively high above the surrounding bog. Assuming there was already some traffic through this area over a millennium ago, we can see how Lios na Gaoithe would have commanded the pass to the rivers, lake and sea (out of picture) beyond, to the south. 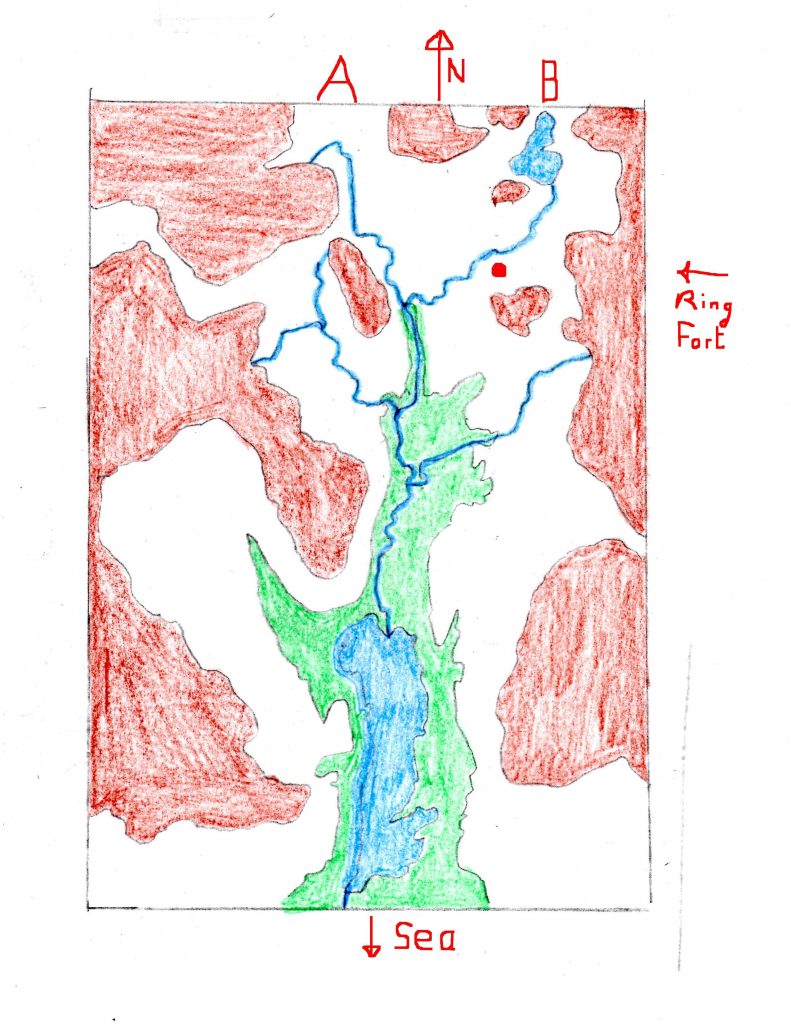 The ringfort in its landscape

Read about some ringfort excavations at other sites on Heritage Ireland’s website.