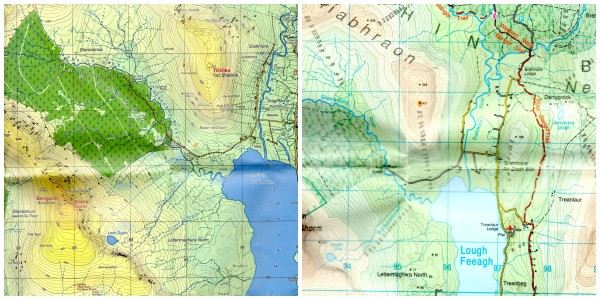 2015 saw the publication of its Wild Nephin Map by EastWest Mapping, employing a 1:25,000 scale to give greater detail than the 1:50,000 scale of OSI’s Discovery Series. So as a Christmas present to myself, I went out and bought it here in the Castle Book Shop (now also online, at https://www.mayobooks.ie/)

To be honest, I was disappointed.

OK, so what’s good about the map? The amount of work that must have gone into its production must be acknowledged. The naming of the most obscure little features, like tiny streams and flanks of low hills is outstanding. Also, I guess having just one map to cover the area is better than the three OSIs required (Sheets 23, 30, 31). But even that’s not quite true, as this map omits a large section of Birreencorragh, a major mountain of the Nephin Beg range. The space allocated to the furthest west 2 km on the Mulranny side of the map could instead have been devoted to Birreencorragh and its satelite Knockaffertagh. [In fairness, it should be admitted that Birreencorragh doesn’t strictly come within the so-called “Wild Nephin” designated area]

Greater scale is generally a plus in any map you might like to use while out hiking, so the detail regarding forest tracks, bridges and the like can certainly be useful to visitors unfamiliar with the area.

The problems with this map, however, are essentially twofold : colouring and feature naming.

The colouring of this Wild Nephin map is not optimal, with too much dark toning, making the deciphering of many feature names unnecessarily difficult. The green representing Coillte plantation forestry and the blue for water are too dark, resulting in identification lettering being surrounded by a pale ‘shadow’ in an unsuccessful attempt to make them more easily readable. Indeed, the lettering is the same colour as water background. Compare the two photos below, with the OSI on the right hand side. I think it’s safe to say the OSI is significantly easier to read, although obviously much less detailed. 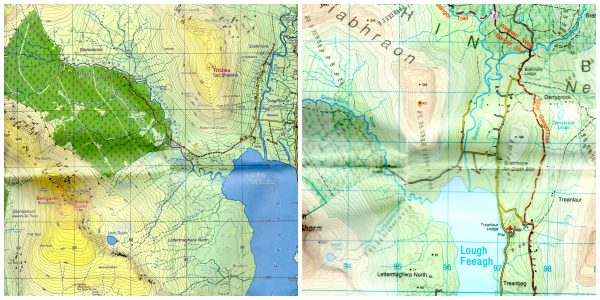 But the real issue of this Wild Nephin map is the naming of major features. For example, Glennamong mountain has been labeled “Mamer Dougher”,but also “Curranyarry” and “Glannamu Mountain”. The aforementioned Birreencorragh has become Birreen Corrough on the map itself and Birreen Corr, where given as an example on the Grid Reference System. Tirkslieve has morphed into Tirclieu, etc., etc.

Anyways, the detail in this map is excellent and I will carry it with me when out in these wonderful mountains and you should too. Just ignore the baseless major feature names employed.

You can buy online from East West Mapping.