Nephin : A Mountain and a Lost Ship

Steve came hillwalking last March and wrote the following article about the day, which he has kindly permitted me to reproduce here. We climbed Nephin – at 806 m, Connacht’s second highest mountain. 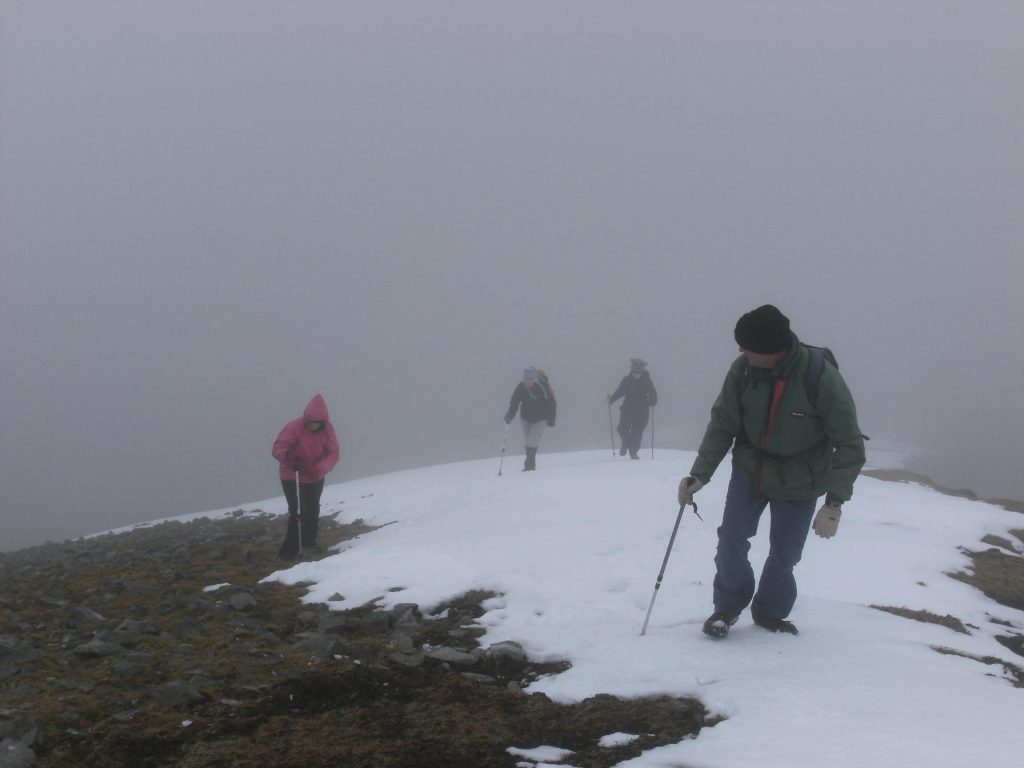 ” A Mountain and a Lost Ship

Barry Murphy met us outside the post office in the village of Lahardane, County Mayo. He was our guide for a hike up Nephin Mór – the second highest mountain in Connacht. With introductions made, our small group set off.

As we approached the trail, Barry introduced us to the local history of the parish of Addergoole. A ruined house had once been the home of a victim of the sinking of the Titanic. A total of fourteen parishioners had sailed on the ill starred voyage; only three survived. The loss is reputed to be the greatest in Europe from a single small locality.

Catherine McGowan is credited with putting the ‘Addergoole Fourteen’ together. She had spent several years in America and had originally returned home to bring her niece out to the States. Others decided to join her and their dream of a new life ended in the freezing waters of the North Atlantic. Catherine perished, but her niece, 17 year old Annie McGowan, was rescued. She lived to the grand age of 95 and is buried in Illinois.

Each year, the tragedy of 1912 is commemorated by the ringing of a lone church bell at 2.20am on 15th April; the moment when the great liner slipped beneath the waves. There is a thriving Titanic Society, and relatives of the passengers still live in the area. A centenary programme is planned for 2012.

We now began our ascent of the mountain. A fine Irish drizzle closed in;  it seemed our efforts would not be rewarded with a spectacular view. Boots crunched in deep snow as we neared the summit. Then, right on cue, the mist lifted and all was revealed in sunlight. Directly below us was the anglers’ paradise of Lough Conn. On the horizon, the conical outline of the holy mountain of Croagh Patrick. To the west, the grandeur of Achill Island and the very Atlantic Ocean that had taken such a toll.

Poses were struck, and cameras clicked as we enjoyed our good fortune. 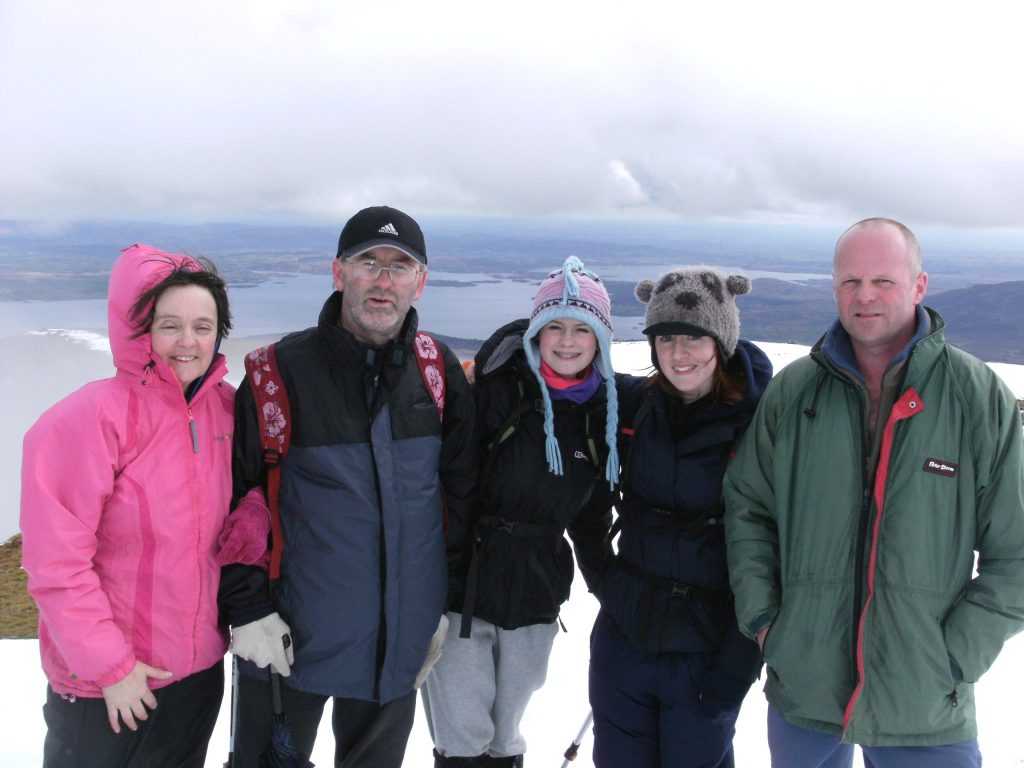 At the summit of Nephin Mór

With hike over, we returned to our hotel where Barry joined us for a pint and the swapping of tales. We much enjoyed his account of hitching through a divided Germany. An East German policeman inspected his belongings. Barry’s meagre rations had consisted of a Mars bar and a hard boiled egg. ‘Crack ze egg’, insisted this paragon of suspicion.

A fine evening was rounded off by a Guinness fuelled screening of the Ireland v England rugby international. I awoke next morning with a heavy head, but a light heart. On checking out, I reminded the receptionist of my heroics in scaling Nephin Mór. I suggested that perhaps they would consider renaming the peak after me. She smiled as she lied that she would ask someone to look into it… “

Many thanks to Steve for this guest blogpost. Read the Addergoole Titanic Society’s website.

Nephin may be hiked from several spots, but I always choose to climb it along the rim of the great northern corrie. Find my next guided hike up. Up and down in a loop usually takes around 5 hours.