Monasteries of the River Moy 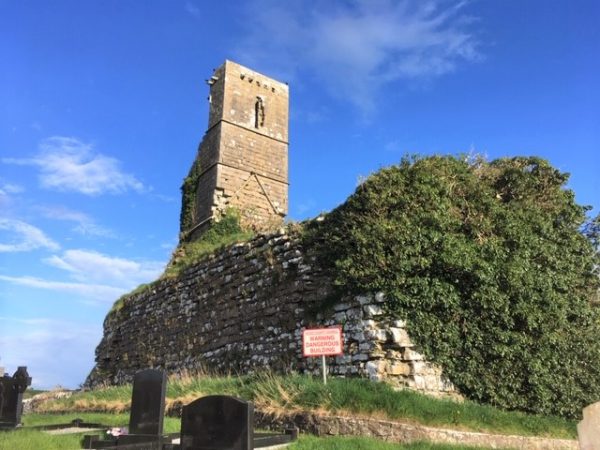 Flowing just 103km from source to sea, the modest Moy isn’t the longest river found entirely within Connacht. That title belongs to the Suck, which runs for over 130km before entering the Shannon below Ballinasloe. Along with its salmon fishery, however, it is the medieval Monasteries of the River Moy that makes this water very special.

Ireland has no remaining wooden churches. While some examples exist from as early as the 8th to 9th Centuries, the ruins of stone-built stand-alone churches and oratories we see throughout the country today generally date from the 10th and 11th Centuries onwards. The larger, more complex ruins of mendicant monasteries, such as these Monasteries of the River Moy, mostly date from the 13th – 15th Centuries.

Religious orders came to Ireland from the 12th Century, with the Cistercians founding their first house at Mellifont, County Louth, in 1142. The Dominicans arrived in 1224, the Franciscans around 1231 and the Augustinians around 1280.

Monastic houses across Ireland and Britain were dissolved during the 16th and 17th Centuries, as a result of the Suppression of the Monasteries, a series of decrees enacted by Henry VIII from 1536 to 1541 and followed up upon by Elizabeth I and through to Cromwell’s time.

From its source 4km east of Lough Easkey in the southern slopes of the blanket bog capped Ox Mountains, the Moy is still young when we visit Court Abbey at Lavagh. I should admit straight away that it’s a bit of a cheat including Court as one of the Monasteries of the River Moy, given that it’s situated 4km away. But here goes anyway …

This 15th Century Franciscan Friary was established by O’Hara for the Third Order Regular, consisting of both friars and sisters. While the building is much ruined and its remains heavily covered in ivy, nevertheless it boasts two features of notable interest.

First, like Moyne and Rosserk, there is what appears to be a secretarium (a type of anchorite cell) inside one of its walls, measuring approx 2m x 1m, with a small window to the outside. Anchorites were people who withdrew from secular life, to lead instead a life of prayer and confinement. The cell’s doorway is currently blocked by a late 19th Century tombstone.

Second, some of its still partially plastered walls show traces of medieval murals, including, again like Moyne, etchings of ships. The various colourations on the wall may be, at least in part, remaining paint from these wall murals.

Following the dissolution of monastic houses during the 16th Century, Court Friary was in a state of ruin by 1586.

Among these Monasteries of the River Moy, the first genuine riverside site is at Banada. This Augustinian Friary, dedicated to Corpus Christi, was founded in 1423 by O’Hara and was the first foundation of the Observant Movement that was sweeping through the Augustinian order at that time. Banada was dissolved around 1613. Very little remains, although it too has some interesting features, most notably part of the stairs to the dormitory which, despite the almost complete collapse of the higher sections of the chancel walls, has managed to survive within them. 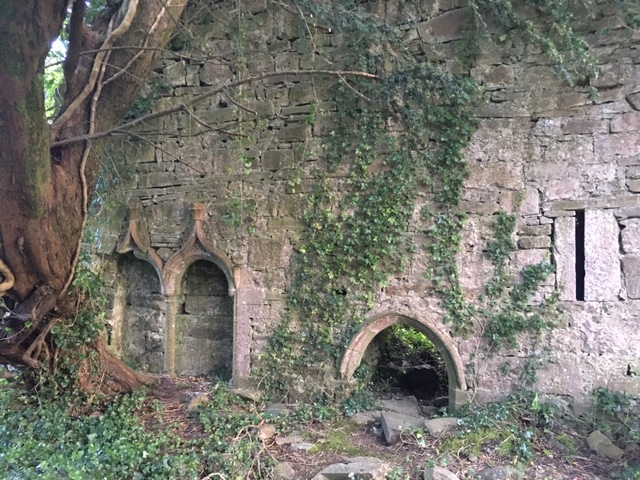 As a side note, it was a Banada friar, Hugh O’Malley, who was tasked with establishing the well-known abbey at Murrisk, sometime around 1456.

Our third house is, once again, admittedly a few km from the river. The Priory of the Holy Cross at Straide was established by the Jordans (De Exeter) around 1240 for the Franciscans and was the first mendicant house in Mayo. Around the time of a fire in the 1250s, Straide was transferred to the Dominicans. It would be suppressed around 1578.

Indeed, the story goes that Basilia de Birmingham, wife of Jordan de Exeter, “having invited her father to a feast, refused to eat until such time as her husband replaced the Franciscan community with a Dominican one. He agreed and envoys were dispatched to Rome ‘with a great sum of money’ to confirm the arrangement.”

Its highlight is the superb sculptured tomb in the north wall of the chancel.

Ardnaree Abbey in Ballina town is situated just beside the modern cathedral (and the river) and was founded sometime prior to 1400, perhaps by the O’Dowds. It was the first Augustinian priory in the West of Ireland. Its remains are scant, though it does retain a very beautiful west door. One curious feature of Ardnaree is how we can see the degree to which the ground level has changed over the centuries, with the door half buried nowadays.

Ardnaree (Ardnary) was suppressed around 1580. 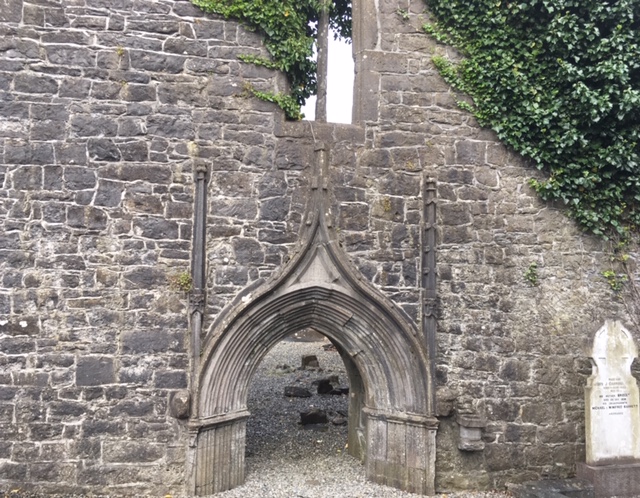 The superb Rosserk Abbey stands right beside the estuary of the river and is one of the finest in the country. Like Court, it was established for the Franciscan Third Order Regular. Founded around 1441 and suppressed around 1578, its very impressive and extensive ruins feature foliate decorations on pillars, the famous depiction of a round tower on its piscinae and its ‘cell’. Its east window is also still in unusually good condition, while its residential wing includes the kitchen, refectory, barrel vaulted rooms, etc.

Challenging the claim of Rosserk is the remarkable Moyne Friary, a mere 5km further west. Built by MacWilliam de Burgo around 1455 for the Franciscans, this exceptional ruin boasts an intact cloister and ship murals on its walls, along with a superb secretarium. Moyne was suppressed around 1590. While there is no carpark and the abbey is not the most easily accessed, a stroll through fields with cows will get you there. 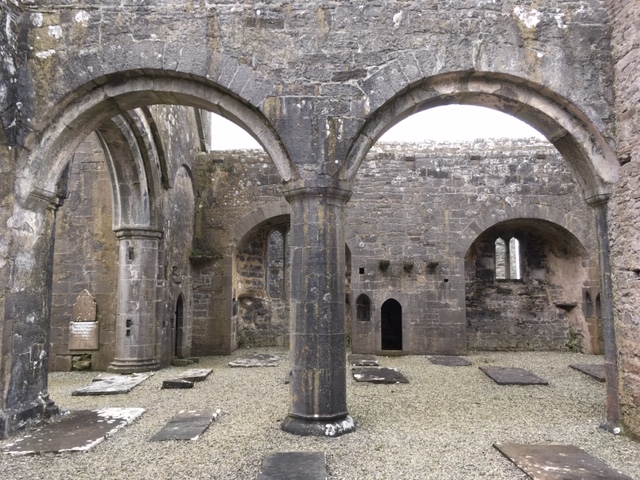 Finally, nothing but the impressive round tower remains of the earlier monastic settlement that must have once stood in Killala town.

As a footnote, while not really on the Moy, or even its estuary, the remains of nearby Rathfran Dominican Priory, dedicated to the Holy Cross, are also well worth a visit. This house was established in 1274 by de Burgo and appears to have been suppressed around 1577. 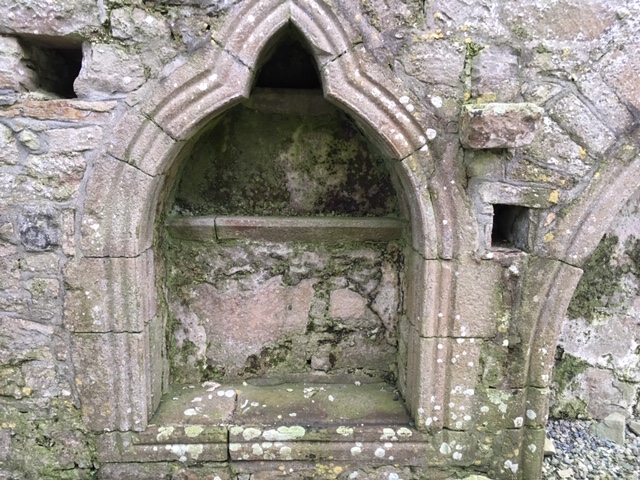 Distances to visit the Monasteries of the River Moy

Court Franciscan Friary is 9km north of Tubbercurry and 41km east of Ballina, just outside the village of Lavagh.

Killala town, with its round tower, is 4km north of Moyne.

You can learn more in-depth information on some of these sites and other fascinating places in north Mayo on the excellent resource of Sacred Landscapes.

Of course, the Monasteries of the River Moy are not the only ones that Mayo can boast. Others include Aughagower, Murrisk, Cong, Burrishoole and the lovely lakeside one at Urlaur, near Kilmovee in the east of the county.

For all tourism-related news and information, visit the North Mayo tourism website.