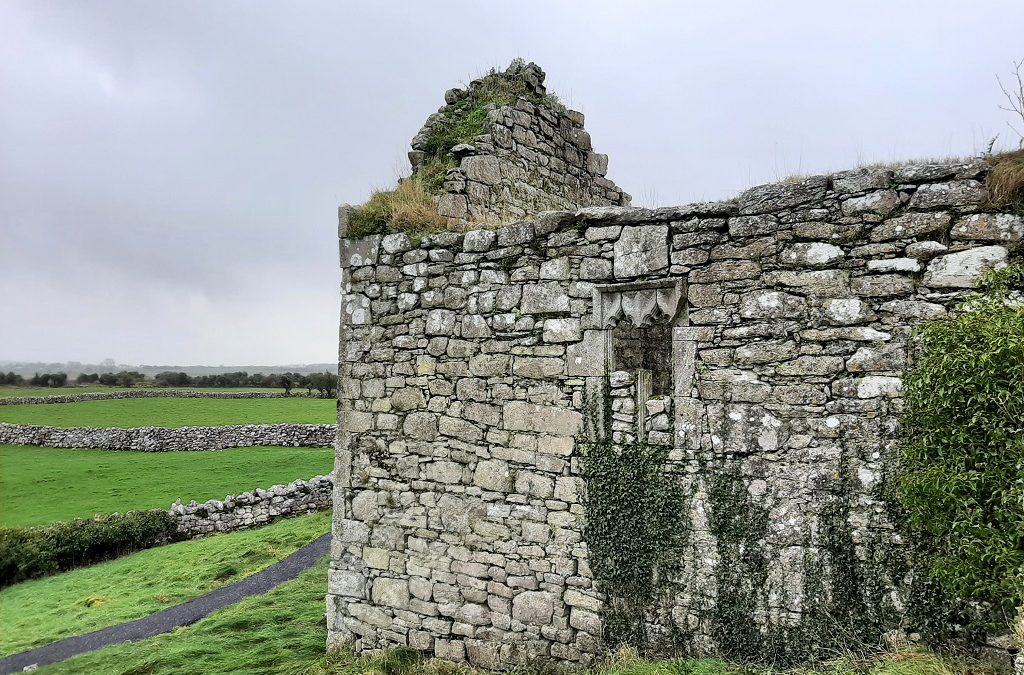 Probably built during the 1420s, not a lot of this friary remains intact at anything more than 1m above current ground level. Unusually, however, quite a lot of its rubble is still strewn across the ground, rather than all of it having been carted away by people looking for stone.

Among the most prominent remains are all three walls of and the archway into the south transept, the latter perilously close to collapse. 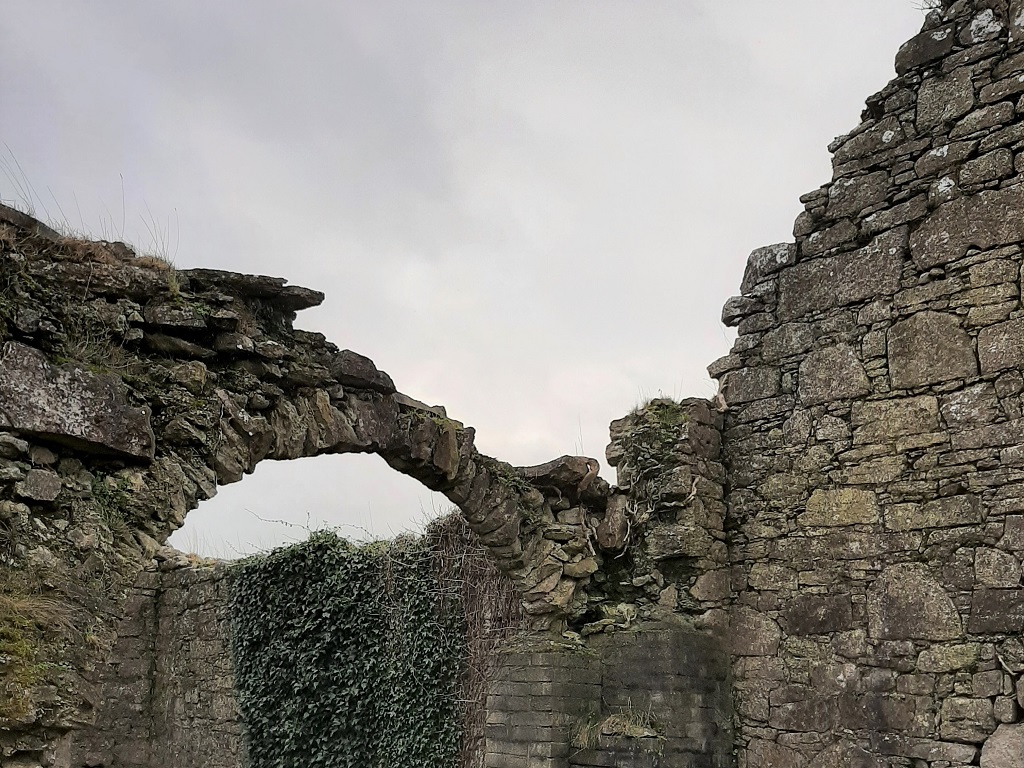 Beyond the core buildings, there are twin archways to the west of the site, at the end of a lovely trackway from the modern road above, presumably entrances into the monastic site.

Further away again, there is the remains of another structure out in the field beyond, which I haven’t explored and which is not afforded a red dot on OSI Discovery Sheet 38, as might be expected. 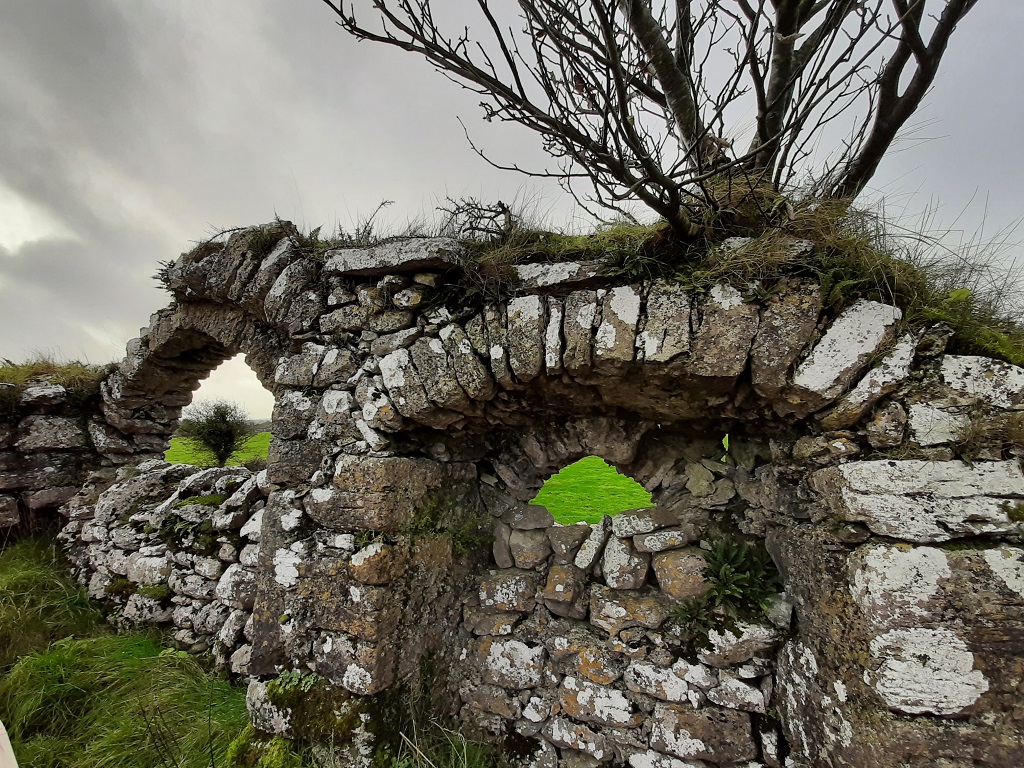 Killeenbrenan Friary is said to have been founded by the De Burgos, the prominent sept in this district at the time. Impressive remains of their castle at nearby Shrule still stand today.

Like all the monasteries, Kill’ was suppressed during the time of Henry VIII to Elizabeth I.

Despite its 1574 suppression date, the following entry appeared in “A Rentall of Mounster and Connaugh”, a 1577 inquisition into the possession and valuation of lands, carried out by Launcellote Alforde, Surveyor General :

“The frierie of Kilbrynane alias Killinebrenane in McWilliam Eghters countrey in the occupation of Thomas, Owen, John O Conell, priests. Valuation of 20 shillings per annum.”

To give some context, those following the Franciscan monastic rule, that is, the Rule of Saint Francis of Assisi (ca. 1182 – 1226), were initially divided into the First Order (friars) and the Second Order (nuns). The former are known as Friars Minor, while the latter are the Poor Clares.

Over time, however, lay men and women, including married, sought to follow the rule but could not join the Order per se, because of their status. Instead, the Third Order (Secular) was created, so that they could follow the rule but remain part of the ‘real world’, so to speak.

Later, in response to the desire of some of these secular people to indeed join a religious community, the Third Order Regular was developed, whereby they could retire from the ‘real world’ and become part of a cloistered religious congregation. These people were known as Tertiaries Regular.

It is believed that Killeenbrenan was the first friary in Ireland of the Third Order Regular.

The south transept, currently inaccessible due to barriers having been erected, contains two nice windows along with a piscina (used for washing the communion vessels).

The west gable wall of the church contains a simple flat-lintelled doorway and a window higher up. This has been somewhat rebuilt, as demonstrated by the placement of two large blocks in the top right (when looking from outside) that contain carved drains. They don’t appear to be in their original locations. I had to zoom in this image, taken on my phone, hence the poor quality. 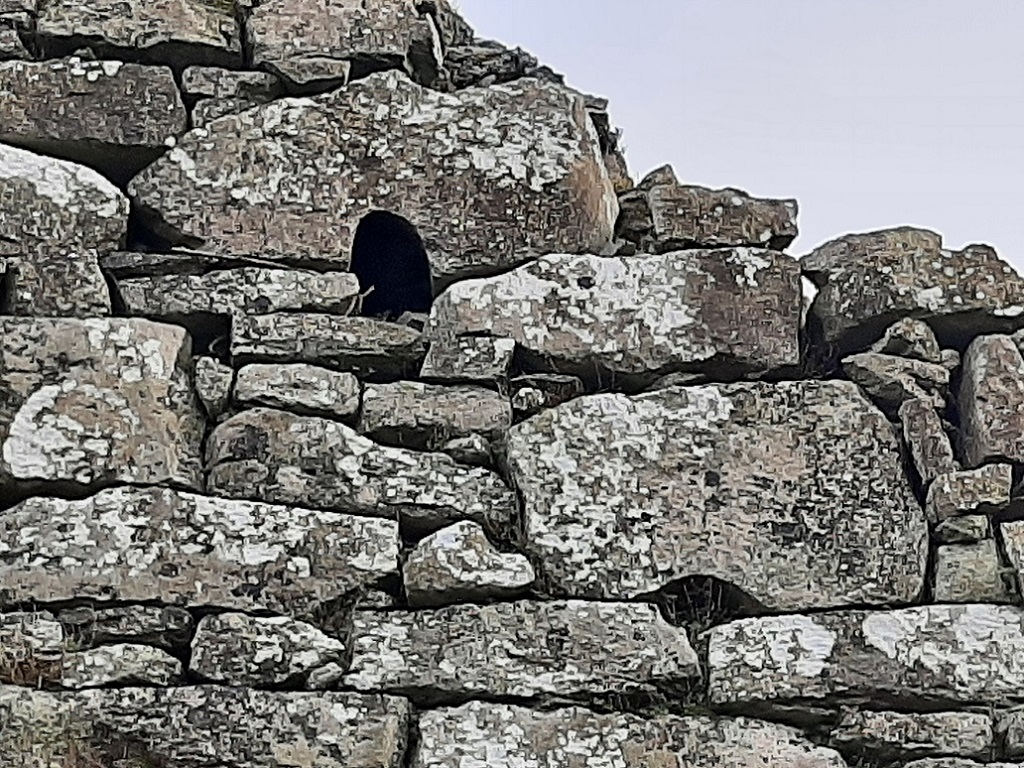 Nothing significant remains of the choir (east) part of the church, other than a section of its east wall and what would appear to have been a buttress erected up against its SE corner.

The west wing of the domestic range is, unusually, in better condition than its east range. Typically, east ranges were built before the west and of superior quality, for they housed the residents. The west, meanwhile, was typically built for visitors and of poorer construction. For this reason, generally, it is the east range that survives longer. This west wing was two storeys high.

At Killeenbrenan Friary, there is little left of the north range, other than its west wall and a section of its south wall. Like at Quin in Co. Clare (see image gleaned from the Monastic Ireland website; north range at top, west range to left), these two sections do not meet fully. At Kill’, there is a gap between them varying in width between 60cm and 90cm at shoulder height (see my rough, not-to-scale plan below). It’s narrow for sure, but might this have been a stairwell? 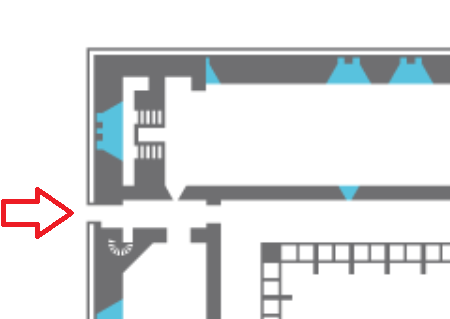 Likewise, little remains of the east range. However, remarkably, two doorways do survive.

One exits to the west, possibly leading to a staircase to the second floor. Perhaps there would also, therefore, have been another doorway beyond this one, into the cloister or courtyard.

The second doorway exits to the south, towards the church. While both doorways retain their lintels, this one hangs by a thread, with no supporting stonework whatsoever where its eastern jamb once stood. As this south-facing door would not have reached the choir of the church, there was probably another room between them, perhaps the sacristy.

Apart from the double archway to the west of the site, as mentioned above, there is also the curious existence of a wall that protrudes out from the church along the same line as the church’s south wall. This wall presumably had a corresponding wall to its north, suggesting this was, at some point in time, another building entirely. Whether it pre-dated or post-dated the friary itself, I’m no expert.

It’s a bizarre scenario, as I’ve never seen a medieval abbey with a building immediately west of its west gable. This 26m long wall appears to be of the same construction style (to my untrained eye) as the church itself, with cut stones marking the far (west) corner and a similar thickness of some 100cm. It raises a number of questions in my head, I must admit. I suspect there’s much more to this site than meets the eye.

In the graveyard, there is a very fine example of a headstone to a blacksmith, showing his tools including anvil, hammer, tongs, horseshoe and satchel. 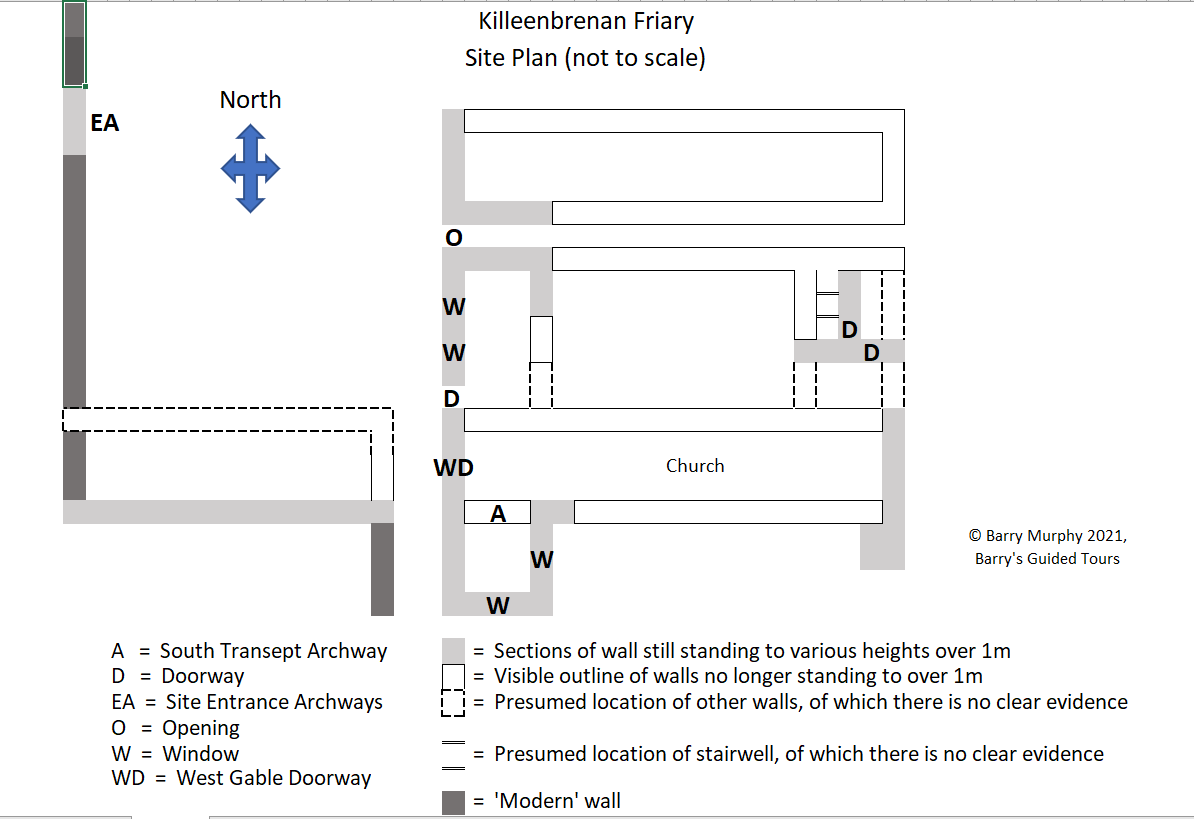 The Hole in the Wall

A very nice legend concerns a hole in a stone on the aforementioned wall to the west of the west gable. Apparently, if you stand seven steps back with outstretched arm and, having closed your eyes, manage to insert your hand into the hole upon advancing towards it, within three attempts, you will go straight to heaven. I failed.

As with the blacksmith headstone mentioned above, I have intentionally not provided an image of this hole, so you can amuse yourself finding it when you visit.

While I am neither historian nor archaeologist, if you’d like to read a more in-depth article, click here to see a reproduction of an article by Dr. Yvonne McDermott of GMIT, from Cathair na Mart (2012), the journal of the Westport Historical Society.

For information on the heritage of Shrule and its south Mayo hinterland, visit shrule.ie.

How to Get There

Heading south on the N84 from Kilmaine towards Shrule, turn right approx. 1km before Shrule, where there is a brown sign pointing you to “Kill Abbey”. After a km or so, you will see the ruins on your left. There is no carpark, so please park safely and don’t obstruct local traffic or farm gateways.

Thankfully, Mayo County Council is currently undertaking stabilisation and repair works at the friary so, as mentioned above, some parts of the site are cordoned off.

Other Posts about Monasteries in Mayo

Read here about a number of monasteries located close to the River Moy.