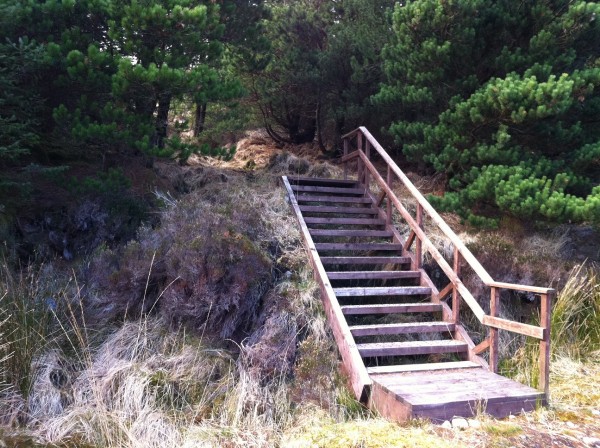 Wild Nephin, states Coillte, would “involve taking 4,400 hectares out of … commercial forest operation and rewilding this land, improving habitat and landscape quality over a 15 year period. The eventual intention … protecting a landscape of scale with functioning ecosystems while providing an authentic ‘wilderness experience’ for those that visit.”

Minister Jimmy Deenihan TD, commented at the time that this project would “protect a large landscape from human artefacts”.

You can read this March 2013 press release.

The Wild Nephin area consists essentially of densely afforested and blanket bog Coillte lands to the East of Nephin Beg and Slieve Carr mountains in Mayo. These are huge non-native conifer plantations, typical of Coillte’s West of Ireland holdings.

Note that, contrary to Mr. Deenihan’s point, the Wild Nephin project team and associates have built human artefacts where previously there were none. 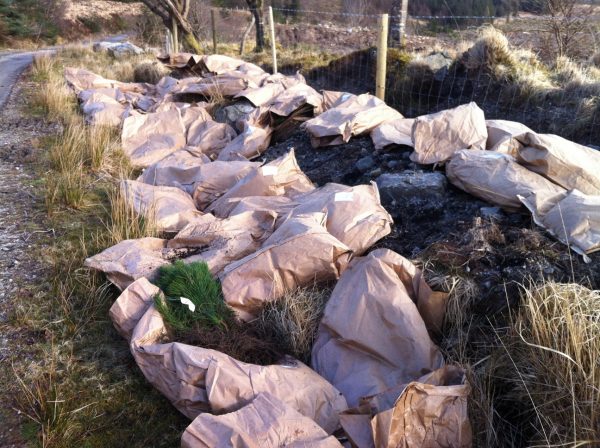 Bags of Lodgepole Pine waiting to be planted in Wild Nephin

This week I visited the area for the first time since last October. On my previous visit, I had not been surprised to see that felling of trees was ongoing and I was anxious to see if this was still the case in spring 2015.

Not only is tree felling still happening, but new non-native conifers (Lodgepole Pine) are still being planted. In addition, new fencing is being erected where previously there was none. Would you call this “re-wilding”? Does this sound like a true effort to develop an authentic wilderness experience?

It’s not for nothing that I refer to this place as the Wild Nephin Charade. 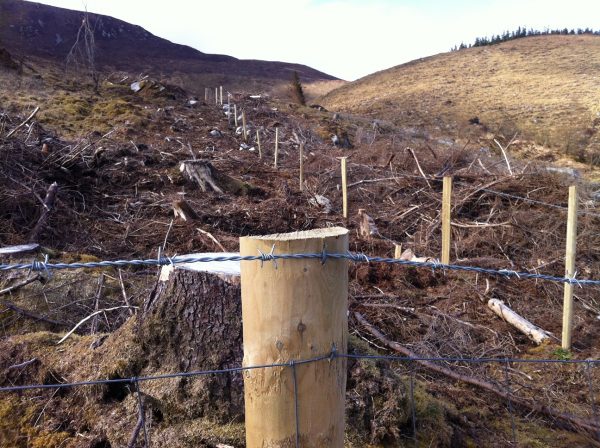 Now, I never for a moment believed that Coillte was in some way going to simply abandon this site. The truth, I suspect, is that not the entire plantation is of such poor quality as to be uneconomical to extract.

So it seems to me that they will continue to extract the parts they deem worthy of the work, while abandoning only the worst of it. But this week’s visit also suggests that they will, in fact, re-plant those areas that are capable of delivering a reasonable crop over future years.

Wild Nephin is, in my opinion, just a cynical PR exercise by Coillte.

As somebody who’s hiked this area for 20 years, I can tell you that, in addition to the active forestry that has been going on for decades, the signs of human influence on this environment are, in fact, on the increase, rather than the other way around. There are now invasive huts and other structures, where previously there were none. Forest tracks for heavy machinery have been widened and strengthened over the last year.

Wild Nephin Charade – a word on our mountains

Our beautiful Nephin Beg Mountains have always been wild, though heavily negatively impacted by sheep grazing.

However, the area is now less wild than before this project was devised. And the monoculture forestry operations continue.

And my follow-up post about the whole project here.

JOMO Weekend on The Mullet Peninsula