With all the welcome and merited hullabaloo about the reintroduction to Ireland of our long lost Golden Eagle (Donegal), White Tailed Sea Eagle (Kerry) and Red Kite (Wicklow), not so many people have noticed the perhaps even more wonderful natural, unaided geographic progression and increase in numbers of Irish Buzzards. 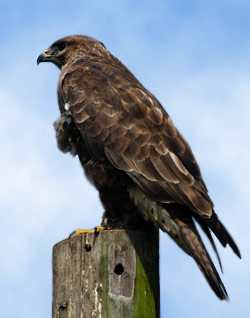 Buzzard expansion is one of the real success stories of Irish wildlife these past decades. Once confined to the North East of the country, they appear more and more frequently along the East coast, towards the South and across the Midlands. Indeed, some have even been spotted in the West, though this remains rare.

On July 30th, a person reported having seen 3 Buzzards in Ballymote, Sligo. Also in July, there was a report of 1 from Corraundulla, Galway. There were additional reports from Sligo in June and Roscommon in April. While I have yet to see any Buzzards in Mayo, I have enjoyed numerous lunchtime breaks watching a family over eastern Roscommon.

What is causing this expansion south and west ? Presumably, a reduction in the use of pesticides and other poisons on farmland must have something to do with it. And since the Buzzard likes to sit in trees that look down over cultivated land, it could be connected to what appears to me to be an ever increasing amount of land being abandoned to native tree expansion and plantation forest cover.

It shouldn’t be too long until we spot buzzards in Mayo.

Now, if only the neanderthals who continue to poison our Eagles would abandon their disgusting behaviour …

Anyway, I found this lovely footage on You Tube. I think it’s from Britain.

And what fantastic birds of prey they really are. On my recent trip to Aveyron, in the South of France, I was treated to them.

As it’s the harvesting season over there, I was afforded a really great chance to witness Buzzards in all their glory. To see these wonderful birds soaring over the fields where the grain is being harvested is a really impressive sight. Buzzards grow to ca. 55cm long, with a wingspan of around 120 cm when adult. They happily hang over the fields being cut, even as the machines below are still in full swing. Why ? Because they’re waiting for dinner to come rushing out from the long corn, as they make their escape from the machinery … into their waiting talons.

On one day, I watched 11 Buzzards over a field, twisting and turning in search of food that was fleeing harvesters. They are incredibly flexible, agile and able to turn and dive quickly. Thanks to a friend’s 7x to 21x zoom binoculars, I got really good views. In the good French light, I could really appreciate the colouration of both the underside and back of the birds. Beautiful!

Interestingly, on another day, I saw one solitary Kestrel hovering over the same field at the same time as 7 or 8 Buzzards. The Kestrel caught something; the Buzzards did not.

You might like to take a look at our annual autumn walking week in the South of France.

I’ve still not seen any Buzzards in Mayo, but continue to enjoy viewings in East Roscommon. Irish Birding reported just one sighting in Mayo during 2013 and none in 2012.

Thankfully, I’ve now seen numerous Buzzards in Mayo, though none yet at the extreme western side of the county. My furthest west sightings have occurred along a rough line from Killala to Crossmolina and southwards to the Castlebar area. A quick look on Irish Birding’s sightings page shows 2 records for Mayo so far this year and 7 for all of last year (2019).

It is now known that there are birds in the general surroundings of Claremorris / Castlebar, though I haven’t spotted any.