Birreencorragh, a Hillwalking Day in Mayo 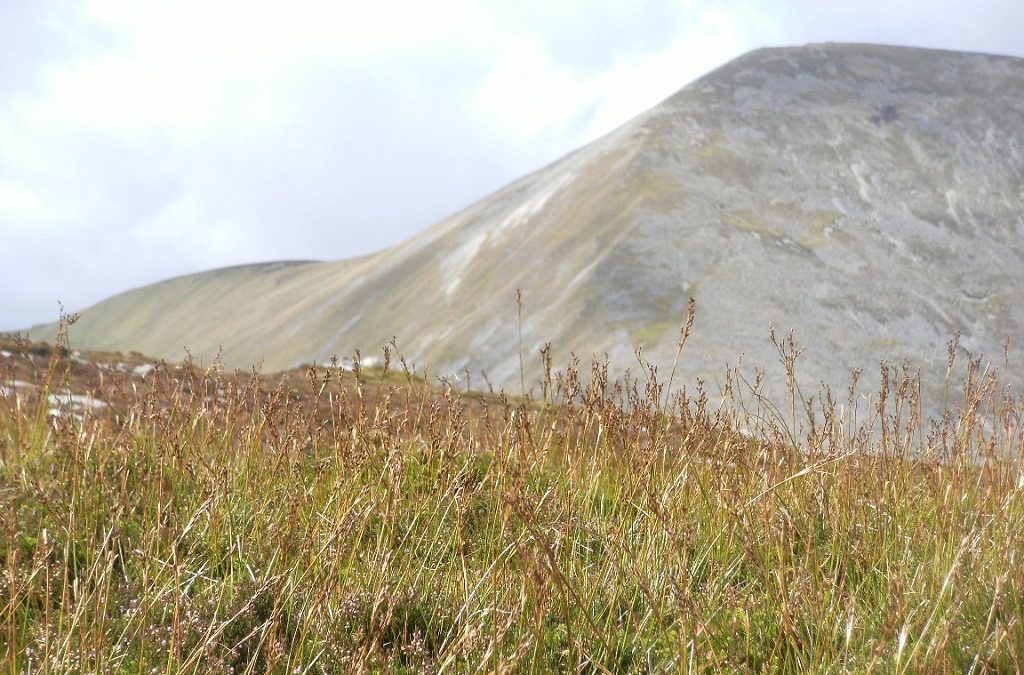 Inside my rucksack is my food, consisting two ham and cheese sandwiches, hot flask (though I rarely ever drink from it), 1.5l of water, apple, banana and chocolate bar. The chocolate is always either a Mars or Snickers – today it’s the former. Deep down under some first aid stuff and my headlamp in one of the rucksack’s pockets lies my “Emergency Snickers”. I’m disciplined and never touch it, save to update it once a year. Check.

By 6.50, I’ve arrived at the starting point, where I meet my two co-walkers. We’re actually on time! Delighted with that. As it’s not raining this morning, I choose the woolly hat, though I always carry the other with me in the rucksack anyway. A baseball cap is much more useful in rain.

The first 3 km of the Glendorragha Horseshoe is along a Coillte forest track. In the morning sunshine, we spot a fox moving along the track towards us. He doesn’t seem to notice us and continues to advance in our direction. We’re downwind and don’t budge. Eventually he spots us, takes a short gawk and jumps into the undergrowth to the side. Beautiful. 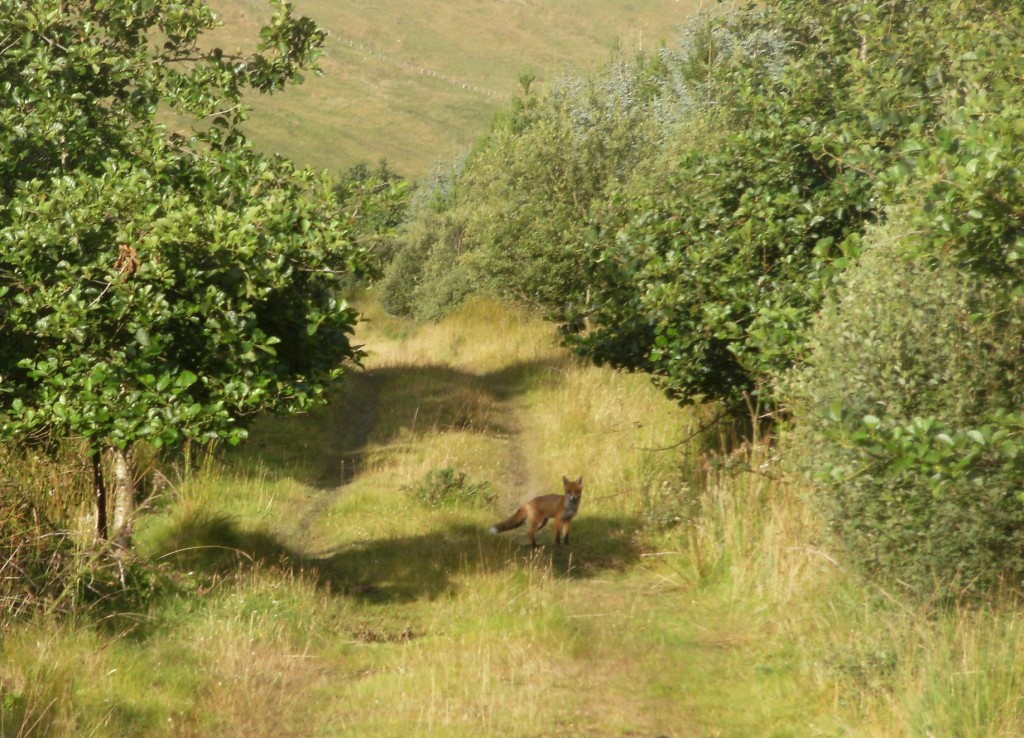 At the end of the track, we need to negotiate about 200 m through plantation forest. It’s never pleasant, trying to avoid the straight, short and sharp lower branches that stick out of the Spruce trees. We make it through and emerge on the other side to that classic West of Ireland view – a gently sloping, bog covered hill, with its drenched grasses and sedges.

This is the strangely named Glenlara (564 m) – a name that really should only apply to the valley below, but which has been adopted to the hill / mountain itself.

Two streams start their lives on this one slope of Glenlara. At their sources is a wall of rushes, thick and energy sapping, that we need to cross. It can be surprisingly difficult to get through this, all the more so when it’s wet underneath and between them – as it always is. We reach the shoulder of the hill and begin our ascent to our target – Birreencorragh (An Birín Carrach ~ the rocky small spike).

Beyond exposed turf, embedded rocks and relatively flat ground, the steep climb to the peak of Birreencorragh invites us to the summit, as the turf gives way to the proper stony, rocky slope.

Birreencorragh is one of the few Mayo mountains boasting what we can justifiably call a peak. Apart from it, I can think only of Corrannabinnia, Croagh Patrick and, arguably, Mweelrea. Other Mayo mountains, like the Nephins Mór and Beg, Slieve Carr, Barrclashcame and Achill’s Slievemore only have rounded or plateau tops.

You could argue that Achill’s Croaghan has a ‘peak’, but to do so would be to ignore the fact that it only appears to have one because the far side of the mountain fell in to the ocean immediately below, sort of…

Approaching from the south, we begin to see the cone of Birreencorragh ahead. Where we cross a boggy plateau between the two mountains, we stop for a snack behind one of the many turf tussocks protruding up to 1.5 metres above the ground level – great for a bit of shelter from the wind.

Below us to the west sits Mount Eagle, really just a spur off the main mountain. We have a strange habit in Ireland of giving names to high points on spurs, thereby elevating them to a status they barely deserve. I discuss elsewhere how many Mayo mountains there are. To the northeast, we observe the spectacular scree face of Birreencorragh, which falls steeply down 450 m, until it begins to level off somewhat. Ahead is the final ascent to the summit, at 698 m. 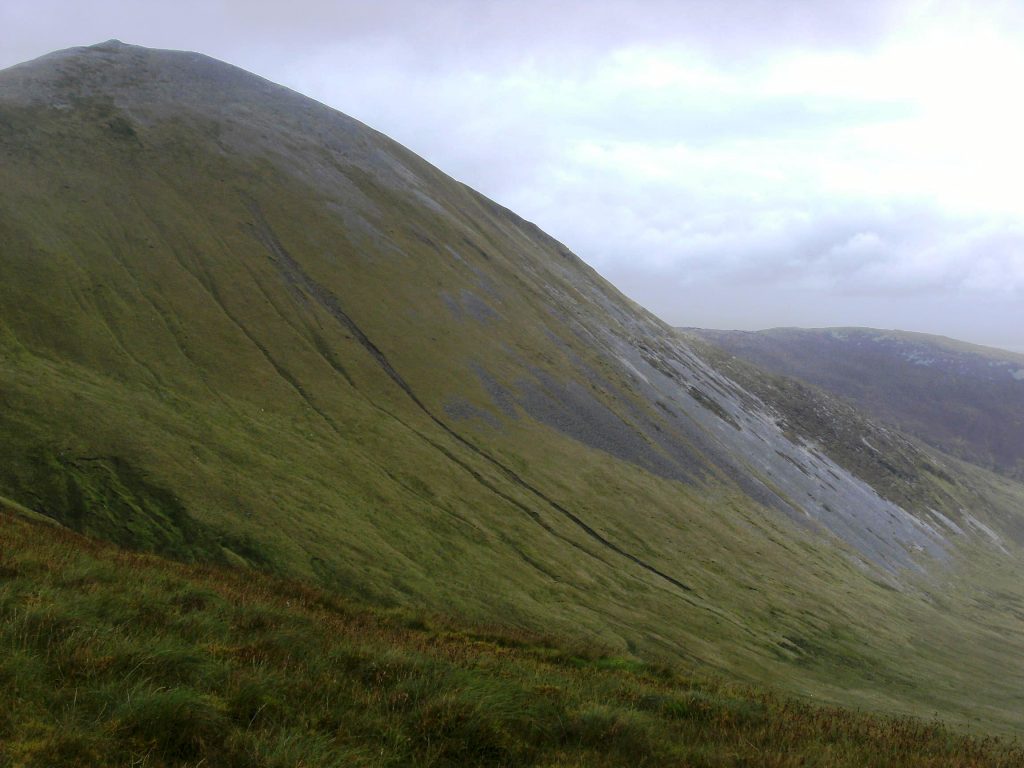 On the top of the mountain, with its broken trig pillar, we are joined by a Peregrine flying just above us. In the wind sheering off the top, the bird appears to remain fairly still, almost hovering. You might think it was a Kestrel, but no, a Peregrine he is. He soon disappears below the steep edge of the mountain, gone hunting down in Glendavoolagh, perhaps.

As usual, we don’t hang around. The wind is cold and the desire to descend is strong. We push on north-eastwards towards the ridge connecting with Knockaffertagh (517 m), before turning south-eastwards and descending onto the col.

Having traversed Knockaffertagh (a dull slog), we descend to the valley below and onto part of the so-called Keenagh Loop. A section of this pleasant loop walk brings us along the bank of the little river we saw from the top of Birreencorragh. From above, it seemed to slice through the bog in the sunshine, like a twisted silver sword across the brown-purple blanket bog landscape below. 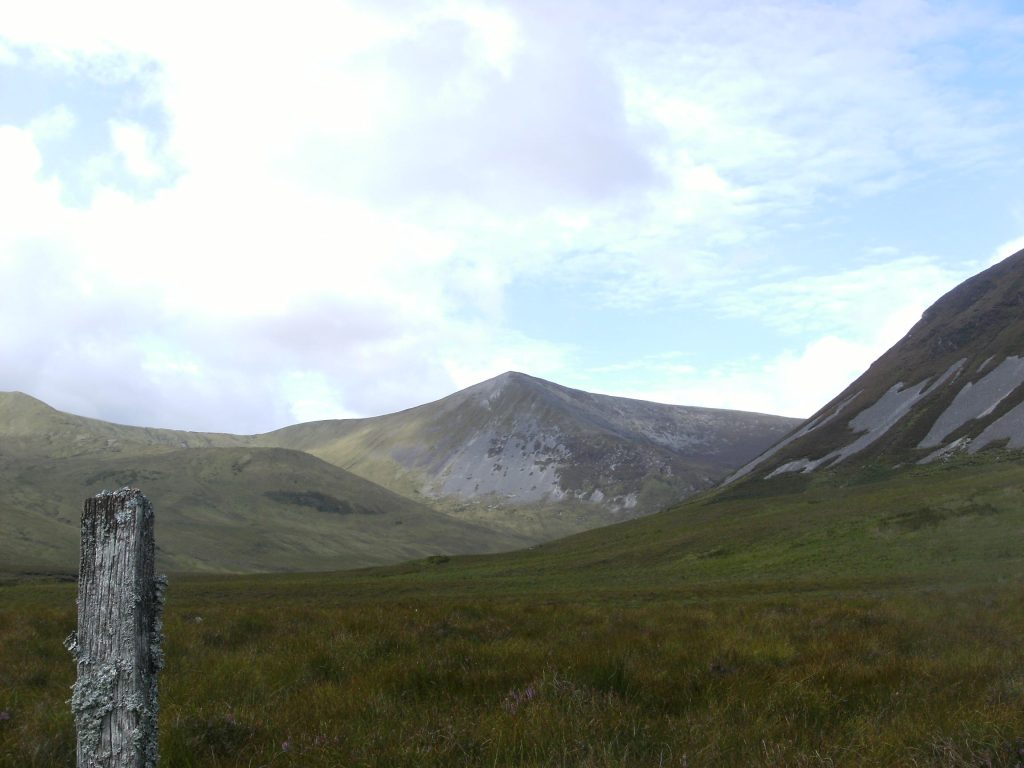 We see Otter spraint (droppings) along the riverbank. Two hares run across the bog to our left. The black-faced sheep seem surprised to see us. As we near the cars along the seanbhóthar, we pass an abandoned farmstead, with Rowan and Hawthorn trees around and the mountain as backdrop. Our legs are tired. The ground all around is wet. The heather lies thick between us and the trees beyond. We know we’re in Mayo.