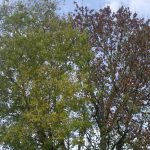 The Ash is the last of the Irish native trees to get its new leaves each year – generally not arriving until May. I am lucky enough to have three and a half Ash trees in the ditch that forms two sides of my back garden. The “half tree” is now eight years old and I enjoy watching it grow each year and keeping the ivy from climbing its slender trunk.

The Ash has quite slender leaves, aligned in pairs on opposite sides of the stem, with one extra at the extreme tip. As a deciduous tree, it loses its leaves in autumn. However, even in winter when bare, it remains one of the more easily recognisable trees. This is thanks to the large black buds it develops during this season.

In Ireland, the Ash grows to around 25 to 30 metres and can have a width of some 20 metres. Of course its wood, strong and flexible, is used to make hurls (although the wood is now often imported from The Baltic States). Hurls are the stick used in the ancient Irish sport of Hurling – Ireland’s national sport. 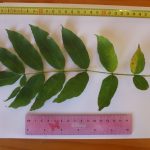 The Ash tree is very common in Irish hedges, often colonising them with either the Whitethorn (Hawthorn) or Blackthorn. It should not be confused with its cousin, the Mountain Ash, or Rowan tree. Similar, but smaller, with the same type of pinnate leaves as the Ash, the Rowan displays gorgeous red berries in late summer and autumn.

Along with the mighty Oak and little Hawthorn, Ash completed the trinity of sacred trees in the Celtic tradition.

Revisit our preamble, listing the native trees of Ireland.