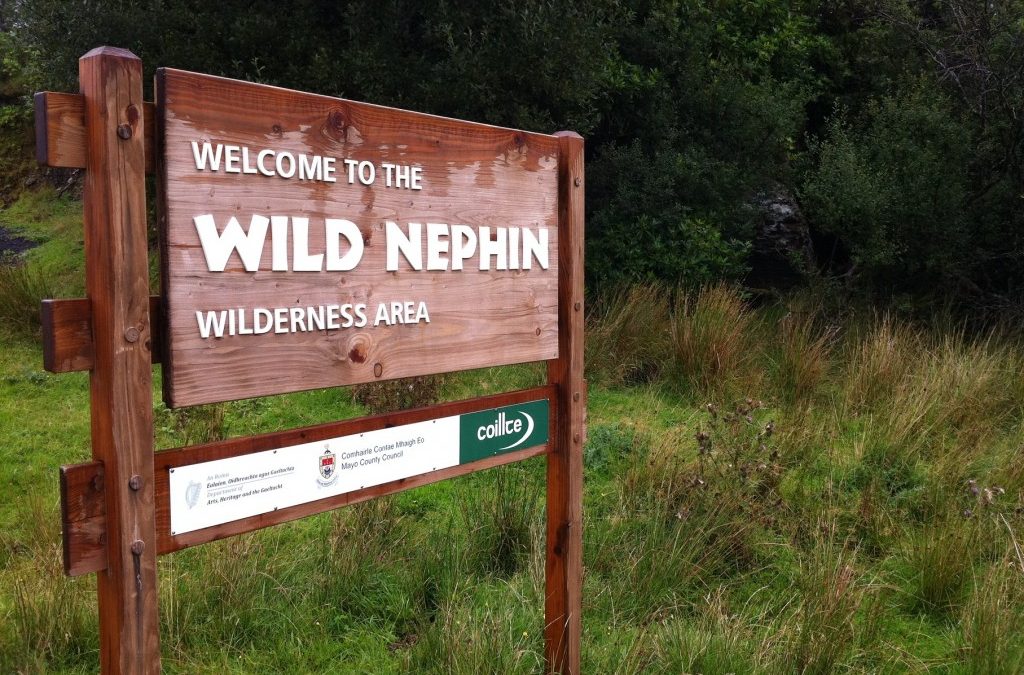 Wild Nephin is the title given to Coillte’s project to ‘rewild’ a large area of blanket bog and plantation forest to the east of the Nephin Beg Mountains of northwest Mayo. The State-owned forestry company aims to ‘create’ Ireland’s first wilderness over the next 10 – 15 years.

Indeed, the area would appear to have already gained the support of the internationally-renowned PAN Parks Foundation, as a “wilderness in a modified landscape”.

[2014 update : PAN Parks has closed down, but the European Wilderness Society has taken the project on board. Read the article at https://wilderness-society.org/partnerships-protected-areas/certified-wilderness-areas/wild-nephin/.]

[2016 update : The above mentioned article has now been removed from the website of the European Wilderness Society (hence the lack of a link), perhaps in the belief that the so-called ‘Wild Nephin’ is no more a rewilding project than the man in the moon …]

Lying immediately east of Ballycroy National Park, with which it shares the mountains of Slieve Carr and Nephin Beg, Wild Nephin occupies the second largest tract of roadless land in Ireland. Whether choosing here or the even larger area immediately to the north and across the Ballina to Belmullet road, this is the place in Ireland to come to, if it’s aloneness and wild country you seek.

Given the past history of aggressive afforestation in this area, however, it is valid to question whether this is, in fact, a wilderness or simply a rural wasteland. 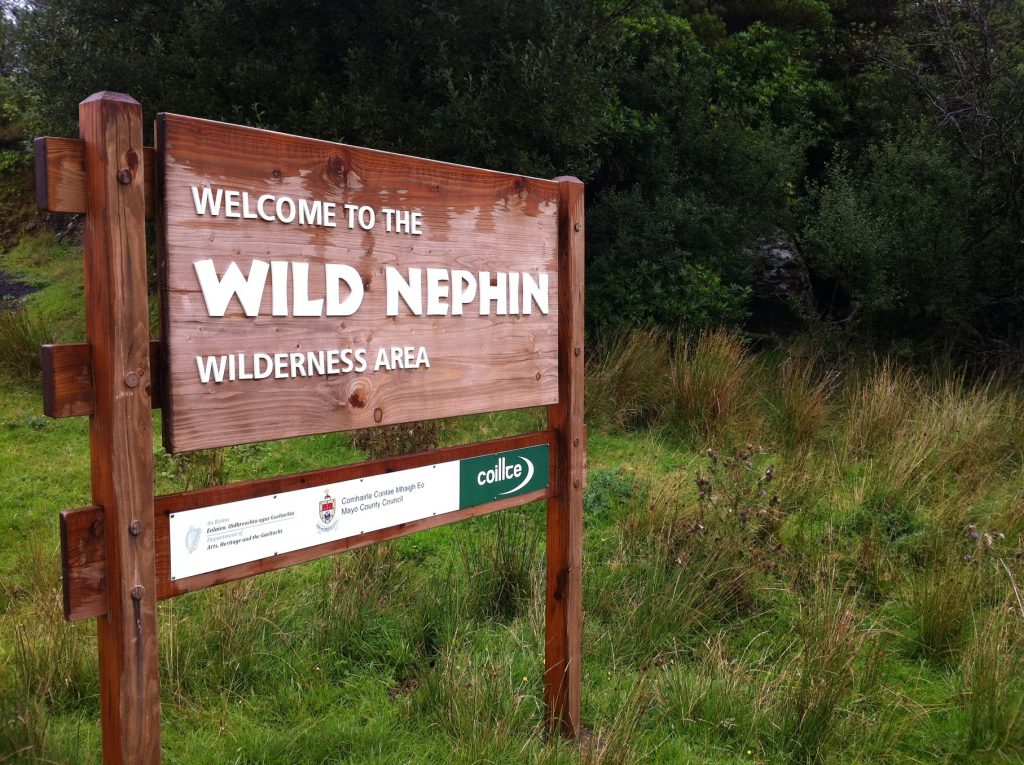 Along with many other parts of the West of Ireland, the area to be rewilded was heavily planted with non-native conifer trees during the 1950s, 1960s and more recently. Of exceptionally poor quality, the land had to be extensively worked, digging ridges and trenches to help keep the densely-packed young trees somewhat dry. Chemical fertilisers were also employed in the early days, to supplement the nutrient-poor nature of the bog. While this work was carried out with the honourable aim of alleviating emigration from this very rural area, by providing employment in forestry, it has resulted in a vast area of wildness, certainly, but wilderness, hardly. What visitors observe today is a landscape massively impacted upon by modern-day humans. Much of the natural, barren Atlantic blanket bog landscape that will become Wild Nephin is smothered under a carpet of alien monoculture.

And yet, should today’s Coillte be blamed for the deeds of its predecessors ? Certainly not. Perhaps we should be grateful that a little sanity has come into the organisation – Ireland’s largest landowner, lest we forget. It should be acknowledged that Coillte has indeed managed a few environmental successes, notably the removal of many conifers at Clonbur Wood, in favour of the re-establishment of native woodland. Mind you, that job was only half-heartedly carried out, as many conifer stands were left in place. Neither should it be ignored that the organisation has singularly failed to eradicate or even control the invasive Rhododendron that chokes much of its lands, for example at the Tourmakeady Millennium Forest or here in Wild Nephin. Management of its felling sub-contractors also leaves a lot to be desired, as sites are often littered with hazardous waste post-intervention. 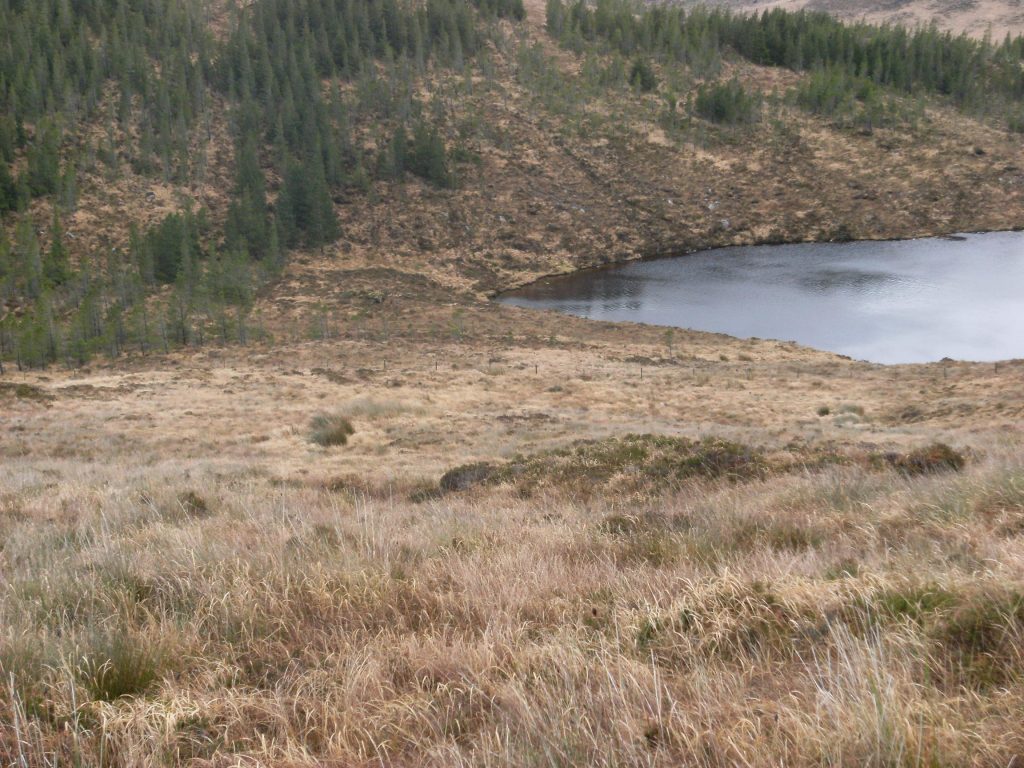 While the company moves into a phase of abandonment of the Wild Nephin area, it nevertheless has still been felling trees on a substantial scale in recent times. It appears to still retain one eye on extracting whatever it can, before letting go. It is, after all, a commercial semi-state. You see, the underlying reason for this new-found “commitment” to wilderness and recreation may well be nothing other than an admission that this forest is of almost zero commercial value. Basically, as I understand it, the timber is of terribly poor quality and its ongoing management too demanding. As they put it themselves, “Coillte owns large areas of underperforming crops in this area with … constraints … which add to management challenges”.

Nevertheless, let’s assume that the company is well-meaning in its intention to leave this landscape to the forces of nature, after successive decades of the polar opposite. Why then do they plan to build huts (bothys) and other infrastructure ? Surely, if they want to “develop a … wilderness” [sic], inserting new infrastructure should not be considered.

But let’s take a step back.

Which is preferable : ongoing management of the plantation forest or its abandonment ? Well, clearly the latter. However, is it preferable to put up signage, bothys and trails or not ? Again, I would argue that the latter is clearly better. The one thing they could do is try to, in some way or other, reduce the density of the conifers, in order to let some light in. Ideally, they could chop down every second row, but I appreciate that that would be nigh impossible to achieve on the scale required. Local landowners could be given permission to remove trees in this manner, for their own consumption. Sound riparian zone management should see the removal of non-native trees from along the banks of rivers, streams and lakes and the creation of a buffer zone. If they could do that, then at least there would be somewhat less the impression of wasteland to the whole place.

Wild Nephin – Get Out There

Is the Wild Nephin project exciting and positive ? Without doubt. Is there a beautiful feeling of aloneness while out hiking the hills ? For sure. Will I continue to walk and lead groups in the area ? Certainly and I would recommend you go there too. Just be aware of the history …

Read my follow-up article written after a visit in early 2015.