“What do you think of it yourself?”, says I.

Sitting enjoying a pint of the black stuff in McDonnell’s pub in Béal an Mhuirthead (Belmullet, Co. Mayo), we were chatting about the sheer scale of the Wild Atlantic Way.

For sure, it’s a long way from Malin Head to Kinsale. Much more so when you hug the coast as you drive. But that’s a good thing.

Now, I’ve been urging you to ‘come wesht’ for years. Maybe this innovation will be the spur that drives you (no pun intended) to do so. Check out An Fál Mór and Ceann Iorrais in far-flung Mayo, or the magnificent Inch Strand in western Kerry. Visit Clifden, the Sky Road and the Alcock and Brown landing site at Derrigimlagh, way out in Connemara. 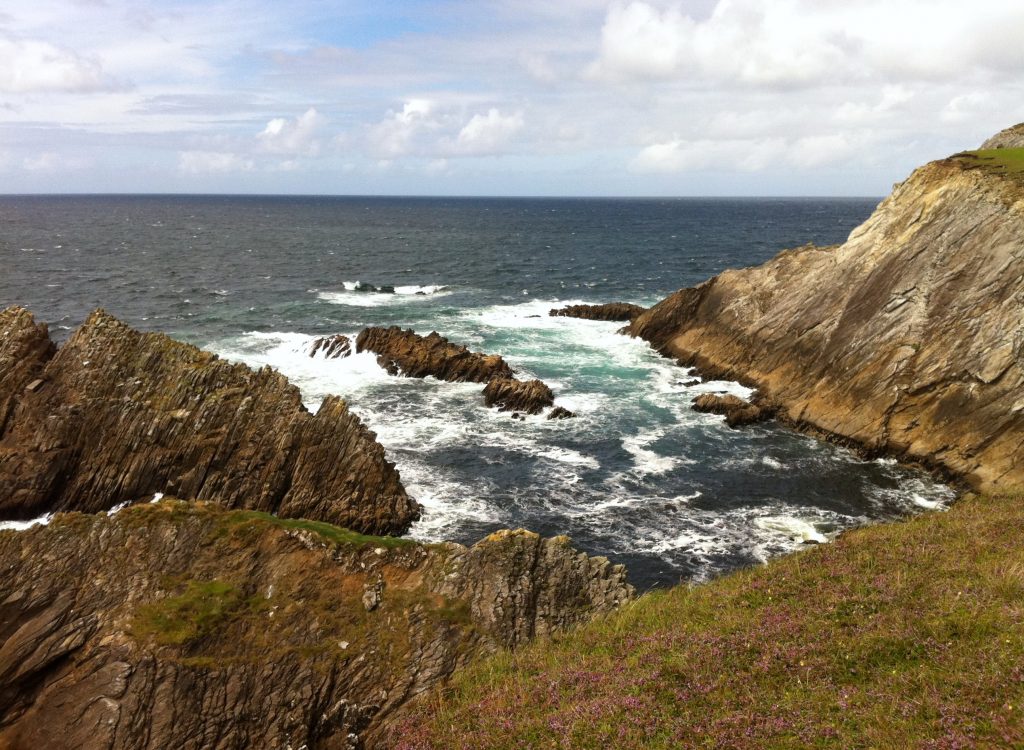 But, once there, get out of your car. Walk to the tidal island of Omey (Galway), the towerhouse at Easkey or up to Queen Maedbh’s Cairn above Strandhill (both Sligo). Stroll around the beautiful Rosserk and Moyne Abbeys, just outside Ballina (Mayo) or feel the wind and spray below Sliabh Liag (Donegal). Heck, there’s even a little bit o’ Lovely Leitrim thrown in for good measure. But don’t blink – you’ll miss it.

The Wild Atlantic Way transports you to the far extremities of Europe, to a land fashioned by ocean, wind and rain. Ours is a place of bog and metamorphic rock, standing testament to a world that has been transformed over hundreds of millions of years. At Ceann an Eaniagh (Mayo), you’ll tread on Ireland’s oldest rocks.

At the Céide Fields (Mayo), you’ll find the world’s oldest field system and, as if that wasn’t enough, you’ll marvel at the staggering cliffs straight across the little road. Further west, at Achill, you can hike to the top of the tallest sea cliffs in Europe (outside of the Faroe Islands). Stare in awe at the ocean’s tumultuous surface, 688m below you.

In Clare, walk around Black Head’s Burren landscape and up to the mass rock. In Sligo, fly a kite above the beach at Rosses Point. In Cork, skip lightly out to the beautiful southwestern islands of Dursey, Clear and Sherkin.

Where to overnight ? Forget about the crowded destinations of Westport, Dingle, Bundoran and Doolin. No, choose the lesser lights and get out and meet the people of the smaller towns and villages, like Falcarragh, Easkey, Belmullet, Cleggan, Fanore, Ballyferriter and Union Hall. Choose Inis Meáin over Inis Mór on the Aran Islands.

We might even see you in McDonnell’s for a ‘scoop’.