When I Met Pat Rua Reilly of Belmullet

It’s ten years now since I interviewed the wonderful Pat Rua Reilly (Pádraig Ó Raghallaigh). Although he passed away in 2008, just days short of his 101st birthday, I still often think of him. 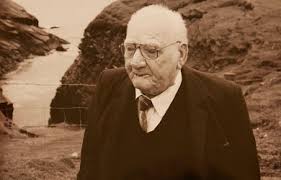 Pat was born in 1907, to William and Bridget (née O’Donnell) Reilly. He was, at the time of my interview, the last living survivor of the terrible fishing tragedy of the night of October 28, 1927, which took the lives of 10 Iniskea fishermen, including two of his own brothers.

Of course, Pat was interviewed many times in his later life, becoming a living recorder of what life was like on the long since abandoned islands off the western side of the Mullet peninsula. Much of the interview I carried out with him at his home in Glenlara is perhaps of little value, other than sentimental to me, but I’ve transcribed here one of the more interesting passages from that day back in the year 2000.

There was something magical about Pat Rua. He had a wonderful way with words and his voice sang with lovely lilting and musical tones, even though, of course, ba í an Ghaeilge a theanga dhúchais. Despite the years passing since I interviewed him, I still regularly listen back to the tapes as I drive, impersonating the wonderful way he would utter little nuggets, like “not a bit” (in response to what difference it made to move to the mainland from the islands), “you wouldn’t know how they were” (when asked to explain an island custom) or “do you know?”, at the end of almost every sentence.

Then there was that classic island-ism of referring to the island as ‘within’ and the mainland as ‘abroad’.

I started by asking him why it was that the islanders left the Iniskeas.

BM : Why did ye decide to come out? What was the story?

PRR (Pat Rua Reilly) : The story was that they wanted them to go out. The priest went at it, do you know? And he wanted them to come out. They didn’t like to leave them on the island. And another thing then, the land was going against them, do you know? It wasn’t growing anything for them. It was burned up. What happened the land was, they never put fertiliser on the land. It was the seaweed, come to land, they used put on it, do you know? And it burned the land. It started bad about after the drowning, after the big drowning. It started burning up. It wasn’t growing right.

BM : And what had it been growing? Spuds?

PRR : Oh, there were spuds and grain. Oats and barley. It was growing everything.

BM : So ye did not come out against your will?

PRR : No, we did not. There was land vacancy out on The Mullet and it was divided between them and each family got about 4 or 5 acres, or 6.

BM : And was there any disagreement?

PRR : No, no disagreement in the world. Everyone wanted to go. They weren’t bothered. They were all agreed to go.

BM : And what difference did it make to ye to be on the mainland after?

Lying 4 km west of the southern Mullet peninsula, the Iniskeas North and South were re-inhabited from the late 18th to the early 20th Centuries. An earlier Bronze Age to early Christian settlement had long since disappeared.

The islands’ population grew steadily through the 19th and early 20th Centuries, even during the period of the Great Famine in the 1840s, to reach a total of around 300 by the late 1920s.

The second half of the 19th Century saw major land management and other changes on the islands, with the result that emigration began to take root and, perhaps, the hitherto tight social structure to unravel. Outside influences multiplied and the islands were to change forever.

The night of October 28, 1927 wreaked havoc on the western seaboard, with over 40 men drowned in a fierce storm, of whom 10 were Iniskea fishermen. Within a few short years, the islands would be abandoned.

I bring groups on guided visits to each of the Iniskea Islands several times each summer. Check my dates for the North Island here and for the South Island here. 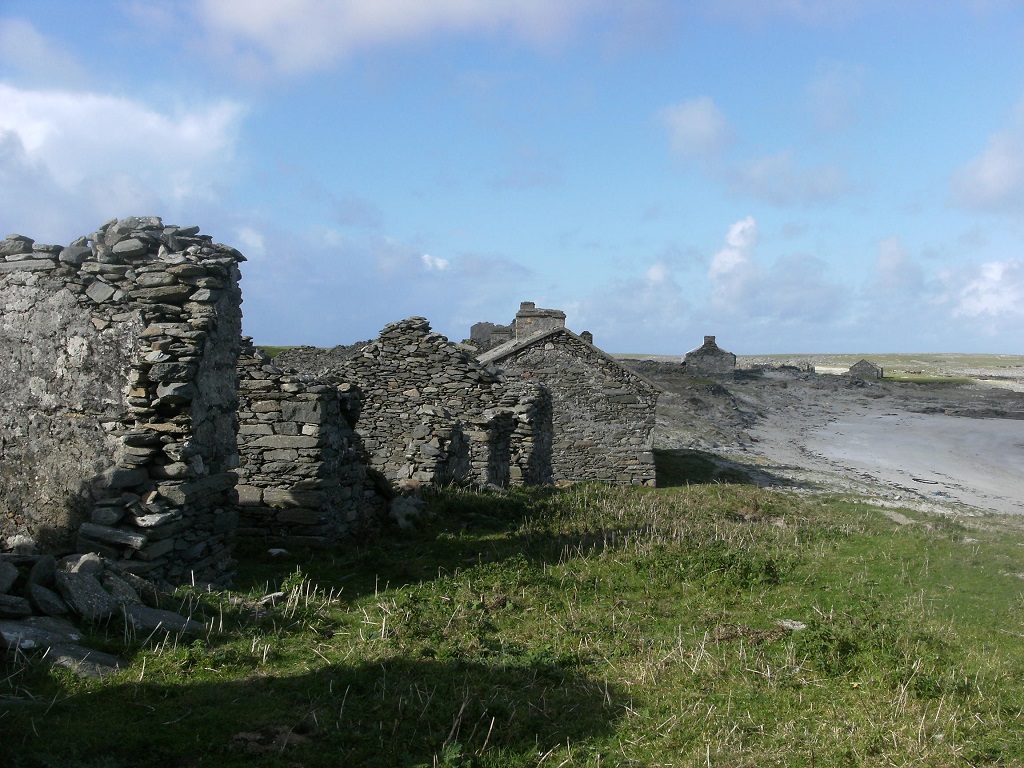