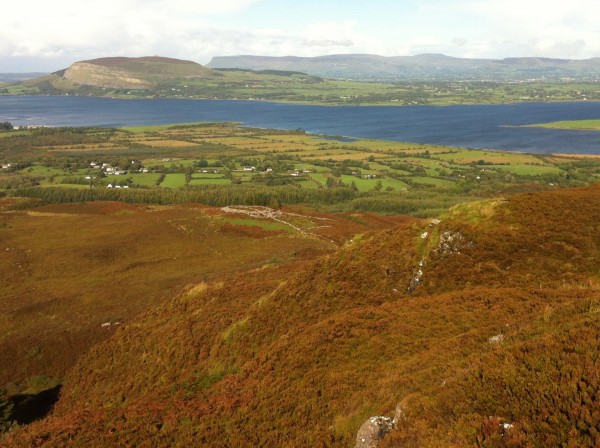 What a slog that was.

Having consulted Bing Maps online and my OSI 1:50,000 Sheet 24, I reckoned this eastern Ox Mountains ramble would take me maybe 5 hours. After all, the successive points to be hiked would be only 272 m, 250 m and 283 m high.

Beginning at Glenwood, near Coolaney (G 620 274), I strolled along the 1.5 km forest track, meeting 4 seemingly wild horses along the way. Then a small path leads up the hillside towards the cliffy northern face of Doomore (272 m). Here was my first encounter with what was to dominate the day – long, deep and thick grass, heather and bracken. This hike would quickly turn into an exhausting trudge.

From Doomore, with its impressive (though damaged) cairn and trig pillar, I headed west towards Doobeg (250 m), admiring the fine ruin of a  caiseal below to the north, then onward towards Crockavreen (283 m). Along the way, I fell more often than ever before, my ankles lassoed by the grabby vegetation or having fallen into one of many, many little bog holes.

A very nice ‘family’ of 6 wild goats kept a watch on me from afar.

Between the heavy showers, however, the views out across Sligo Bay to Knocknarea, Benbulben and Slieve League beyond were gorgeous. 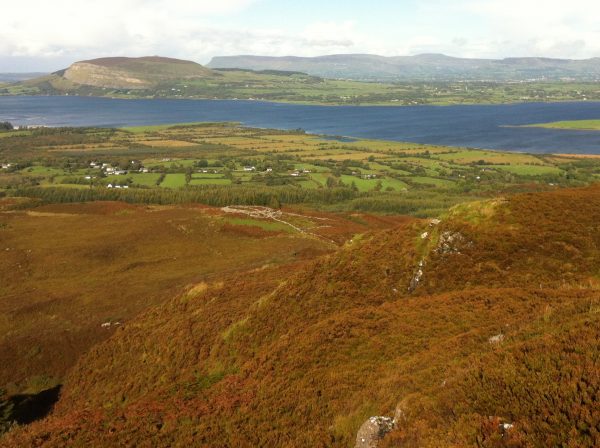 Descending the far side of Crockavreen, I made a classic mistake of the tired mind. To vary my return, I decided to follow a forest track north of the hills, then eastwards, reckoning I could skirt along underneath Doobeg and Doomore back to the original track, while visiting the caiseal along the way.

I did so without consulting my map, however, as it was lashing rain and I didn’t fancy getting it out. Much to my frustration, the forest track evidently exited the mountains to the south rather than the north and I ended up at its dead end in the middle of the conifer plantation. Nothing for it but to plough through some 400 m of dense plantation forestry to regain height. 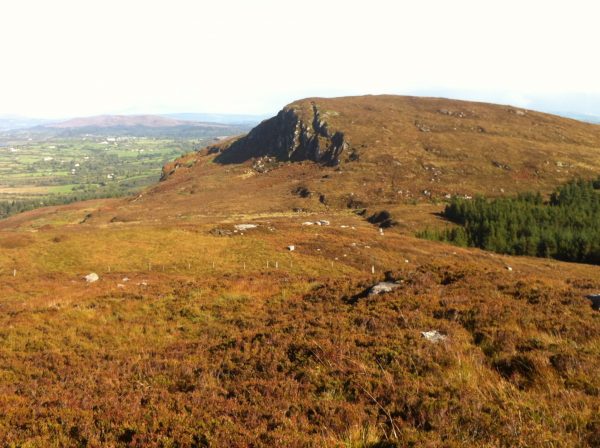 Eventually, having re-climbed Doobeg, the visit to the casieal was abandoned and I focused instead on Doomore. I recovered the path and its horses, shattered from the physical effort of wading through such thick vegetation for hours on end.

While this was a tough day, it did shine a light on an all-too-rarely encountered phenomenon. Clearly little grazed, the thickness and height of the heather was magnificent to experience. Pity half the mountains seems covered in dreadful monoculture conifers.

You might also enjoy this account of a day up in the Sheeffry Hills of south Mayo.