To the south of Nephin Beg mountain and just east of The Bangor Trail (though barely visible from it and missed by many walkers, I would guess) lies the small Lough Avoher.

You might think I should have added “and irrelevant” to my description. This is not a Lough Feeagh, Furnace or Carrowmore, greater lakes of this part of boggy, rocky west Mayo. But to do so would have been an error, for irrelevant this little body of water most certainly is not. In its very name lies a clue to the lives of our ancestors, men and women who passed this place in harder times. Much harder. 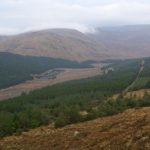 Lough Avoher by the Bangor Trail

The anglicised form of the name of this little lake, you see, reveals its original name as gaeilge, “Loch an Bhóthair”, meaning ‘lake of the road’. Therein we discover a beautiful and important testimony to the history of this place and the age of The Bangor Trail. A drover’s path from the outlying areas of north Mayo when that bog-saturated land was still roadless, the Trail witnessed many people bringing their animals down to market in the towns to the south. Perhaps they stopped for refreshment at Lough Avoher. They may even have passed the night by its shores.

I’ve known about Lough Avoher since I first laid eyes on it while reading Joe McDermott’s excellent little guidebook to the Trail, back in the mid 1990s. From that same time I’ve known that the lake is incorrectly named “Lough Aroher” on Ordnance Survey Ireland’s Discovery Series maps (sheets 23 & 31 ; grid ref. F94 07). Unfortunately, I now realise, I did nothing about it at the time. I should have picked up the phone and let OSI know about the error and to have it corrected. I could have done it, I now know, because I finally did a few weeks ago. I received OSI’s agreement and was helpfully told that it will be changed in the next version of the map.

Over the intervening years, a walking trail has been developed nearby the lake (as a loop off the Bangor Trail) and a mountain bothy structure has been put in place, both employing the incorrect name for the lake. Happily, I’ve been assured that the bothy mistake is to be rectified this winter. I’m appreciative of that.

The problem here is a lack of cultural awareness for what people are dealing with. Loch an Bhóthair stands as a witness in the bog, the rain and the wind to the very history of this part of the world. To a people who tried to eke out a miserable existence, without today’s fancy waterproof hiking boots or jackets to shield them from the elements of west Mayo.

A quick glance at McDermott’s book, or an attempt to involve members of the local hillwalking community would have avoided these mistakes being made. Either myself or Joe, and presumably plenty of others also, would have put the authors of the walking trail or builders of the bothy straight.

There is a general carelessness about Irish language place names creeping in that bothers me. Just a short distance away from Lough Avoher, out past the wonderful ringfort at Lios na Gaoithe, lies a lake whose county council signpost declares it ‘Lough Bunaveela’ in English and ‘Loch Bunaveela’ as gaeilge. In other words, no attempt whatsoever was made to identify its true name in Irish. Lazy.

Before I end, I should admit that my own Irish is very poor. However, I like to think I have an appreciation of our history, our heritage and what the French call our “patrimoine”. Lough Aroher is dead; long live Lough Avoher.