From Castlereagh to Rathfran, a Golden 5K 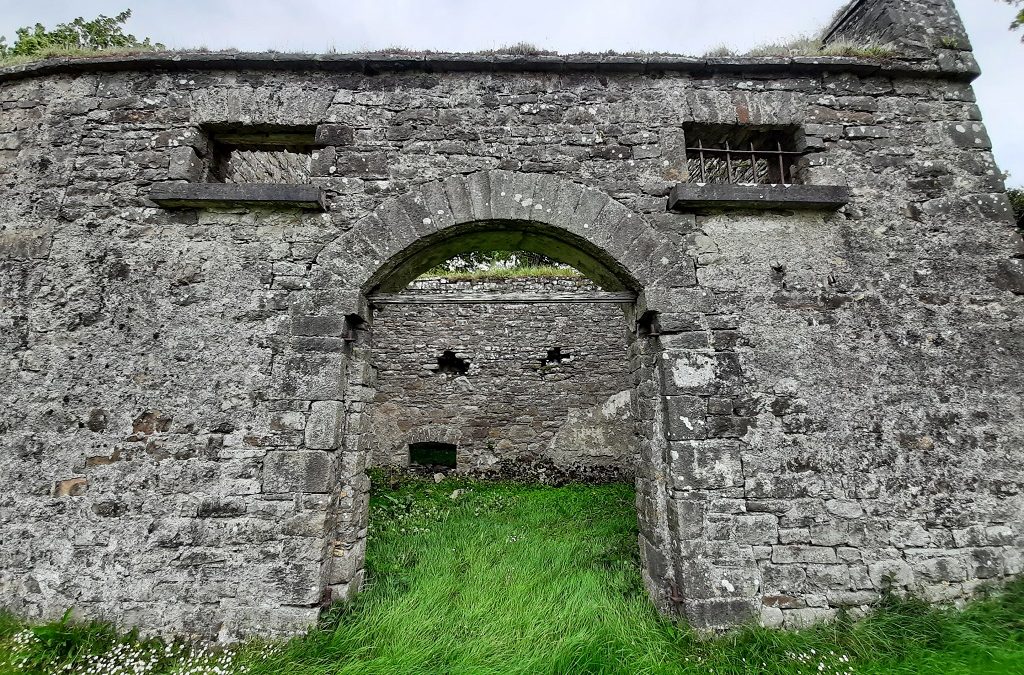 OK, so “Golden 5k” doesn’t exactly trip off the tongue like the catchy “Golden Mile”.

But that’s the distance by road from Castlereagh to Rathfran; from the site of a once ‘big house’ to the ruined former Dominican Friary, near Killala in north County Mayo.

Castlereagh was described in 1786 as “the fine seat of Mr. Knox”.

The house was sold by Arthur Edward Knox at the Encumbered Estates Court of the 1850s, following the Great Famine, and bought by his brother Ernest. During this period, the Knox family lands amounted to over 42,000 acres (17,000 hectares).

The Knox family had come from Renfrewshire in Scotland, via Counties Donegal and Tyrone, during the early 17th Century. Their name appears to have been an anglicisation of Cnoc, the Scots Gaelic (and Irish) word for ‘hill’ or, in this case, perhaps ‘of the hill’.

William Knox was born around 1590 in Silvieland, Renfrewshire in west Scotland. He was one of the original Knoxes who came to Ireland and died around 1650.

“engaging in merchandise at Dublin, became opulent. He acquired the estate of Lifford in county Donegal.”

Another early Knox arrival was Andrew, appointed protestant Bishop of Raphoe in county Donegal in 1611. He was born around 1559 and died in 1633.

William Knox, second son of William of Lifford, was born around 1630 and died around 1707. He had acquired extensive lands by 1682, including Castlereagh.

“He purchased lands in the counties of Sligo and Roscommon and the estate of Castlerea[gh] in the county of Mayo.”

He first married Mary Palmer of nearby Castle Lackan (Lacken), with whom he had 3 sons and 1 daughter. He would later marry a daughter (first name unknown) of the Croftons of Rappa Castle, with whom he had a further 2 sons, William and John. 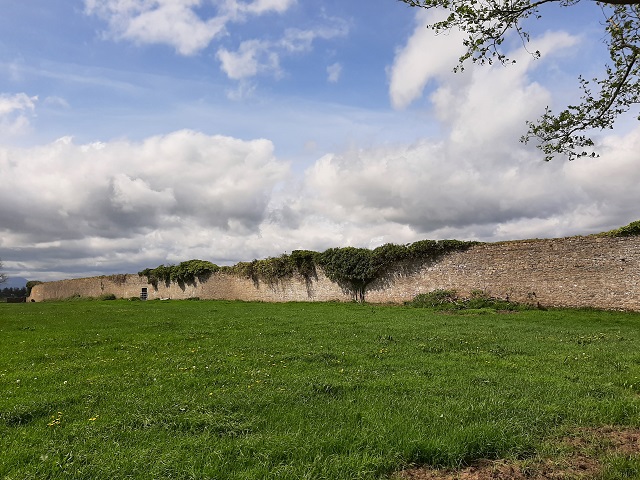 Over the following century, the family would continue to acquire, through marriage, vast tracts of north Mayo. Extant houses associated with the wider Knox family include Belleek Castle, Mount Falcon and Errew Grange.

Despite his advanced age when having the children mentioned below, there is no suggestion in the records of there being a “missing generation” here.

William and Mary’s first son, Francis (1682-1730), acquired Moyne Abbey. Their third son was Richard who died in 1754, without issue. Their daughter was Mary.

Together, they had 1 son and a daughter named Sydney.

Their son was John “Diamond” Knox (1728-1774), who became MP, first for Donegal and later for Castlebar. He married Anne King of Rockingham House, Boyle (today’s Lough Key Forest Park), in 1750 and had 2 sons and 3 daughters. “Diamond”  got his nickname because of the make-up of one daughter’s dowry, upon her marriage.

Their elder son was Arthur Knox (1759-1798), who would hold the posts of High Sheriff for Mayo & Wicklow. The latter was because he purchased an estate at Woodstock in county Wicklow. In 1781, he married Mary Brabazon, daughter of the Earl of Meath.

Arthur & Mary had 3 sons and 2 daughters.

Their eldest son, John Knox (1783-1861), would also become High Sheriff for both Mayo and Wicklow. John married Maria Anne Knox, his first cousin, daughter of Major John Knox, above, in 1808.

Arthur Edward was the absent landlord at Catlereagh when, as mentioned earlier, he sold it and lands at the Encumbered Estates Court (EEC), around 1853. He was one of the founders of the British Ornithological Union in 1858 and the author of 3 ornithological, fishing and hunting books.

Ernest purchased the demesne at Castlereagh, plus 1,600 acres, from his brother at the EEC and married Charlotte Catherine Knox, a cousin, in 1861. Together, they would have 2 sons and 4 daughters.

Ernest and Helen were the last residents of Castlereagh.

The house was sold and demolished in 1936, with its contents auctioned off. You can still see remains of the very impressive demesne walls. 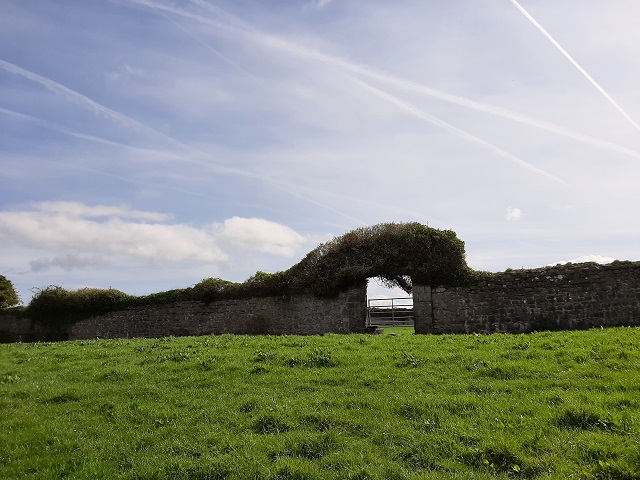 Moving along then from Castlereagh to Rathfran, first pull in at Palmerstown Bridge where there is space on the Killala side. See if you can observe several bird species in the water below, including Dipper, Grey Wagtail, Heron, Little Egret and, if you’re really lucky, the elusive Kingfisher. Be mindful of traffic.

The Dipper is one of our most entertaining birds, as he dives under the water in search of larvae and re-appears a metre or more away. Try to predict where he will next surface.

Along this stretch of the Palmerstown River (aka Cloonaghmore River), as it enters Rathfran Bay, you might also spot Otters.

Having crossed the bridge, coming from Killala, take the road straight north, rather than remaining on the R314 westward towards Ballycastle. Straight in front, you will notice the entrance gate to Palmerstown, formerly the seat of the Palmer landlords, then later of an arm of the Knox family, those of Henry A. The larger house that once stood on this site is said to have been burned down during the 1798 Rebellion.

You can park at a national school on the right-hand side further along this small road and, immediately after it, observe the riverbank and its multiple birds, notably Curlew, Little Egret, Heron and various duck and goose species during winter.

Further along, you will pass the entrance to another former “big house”, at Rathfranpark. This was the home of Edmund Knox at the end of the 19th Century.

Note that both Rathfranpark and Palmerstown are still inhabited and neither house is really visible from the road.

The next point of interest on this stretch of road is the excellent remains of a court tomb in a field on the right-hand side. The oldest man-made structure on this stretch from Castlereagh to Rathfran, court tombs date from around 3900 – 3500 BC and were so named because of the almost semi-circular forecourt at one end of the long stone cairn that enclosed the burial chambers. (As a matter of interest, there is an even finer example further north, at Rathlackan).

A stile is provided in the wall by the road, so permission to enter this field is evidently not required. 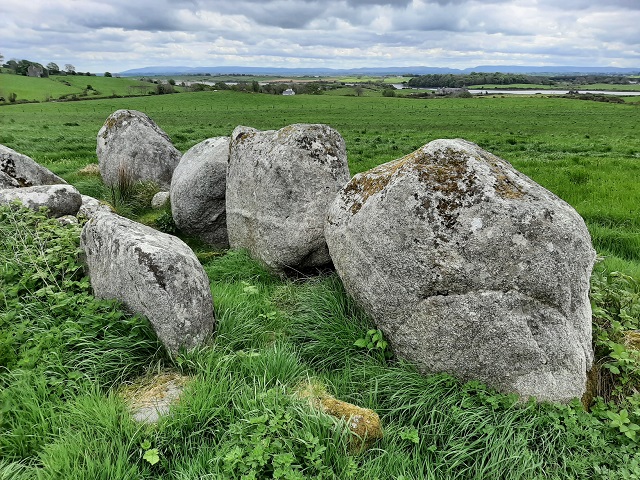 This superb erect ogham stone is located in a field on the left hand side (NW) beyond the crosssroads you come to, shortly after the court tomb. Please request permission to enter, as this is on a working farm.

Probably the finest ogham stone I have ever seen, it stands around 3.2m in height and its roughly square form measures approx 70cm x  80cm.

Many of the ogham incisions are still clearly visible – see a detail in my picture below. 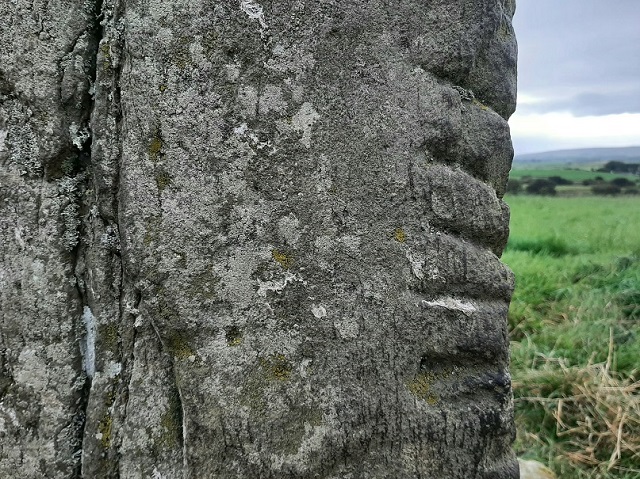 Having visited the ogham stone, turn your car around and take the left (eastwards) at the crossroads you passed earlier and, shortly, you will spot the extensive ruins of the large Summerhill up on the hill to the left. Summerhill was in the possession of  Thomas Palmer, leased from Ernest Knox “for 444 years”, during the time of Griffith’s Valuation in the 1830s. it was later sold to the McCormacks, but has been in ruins for many decades.

Please note that this ruin is on private land and I was given permission to visit. 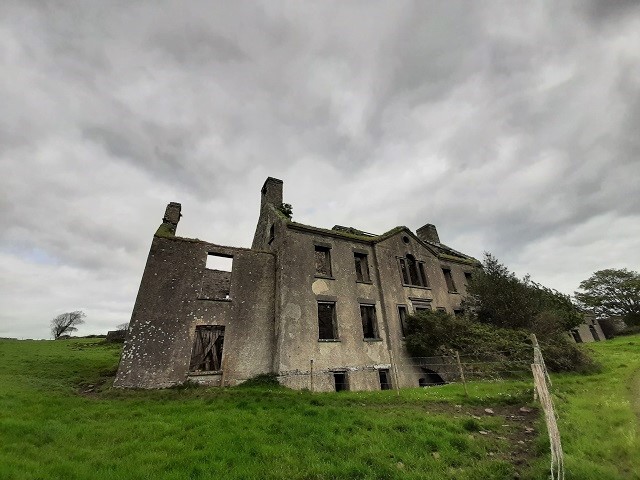 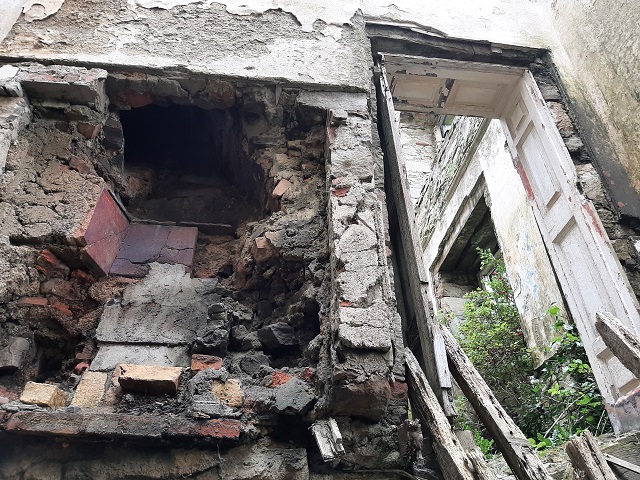 Continue down the road, turn right and park at the graveyard. Ramble down towards Rathfran Friary. The last time I was here, I was treated to one of the healthiest looking foxes I’ve ever seen, foraging the shoreline at low tide, out among the rocks and seaweed. In the beautiful spring sun, his coat was a magnificent orange/rust.

A male Sparrowhawk landed on a fence post in front of me here one day. This remains the only time I have ever seen a male in Mayo, though I’ve enjoyed numerous sightings of females.

Rathfran is one of the medieval abbeys covered in this post about the Monasteries of the River Moy. 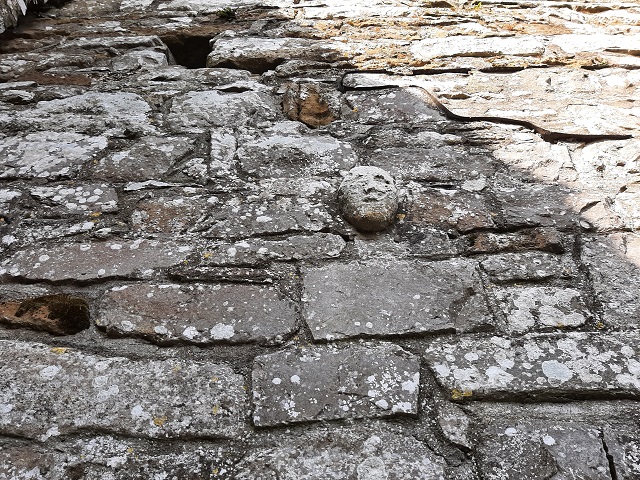 Beyond our Golden 5k from Castlereagh to Rathfran, and if you still have time, you can also view the extensive ruin of Castle Lackan (or Lacken), referred to above, while a nice ramble through gorse-lined lanes and fields will bring you to the well-known folly atop Lacken Hill. At various points from the late 18th to late 19th Centuries, Castle Lackan was occupied by Sir Roger Palmer, Sir John Palmer, James Cuff, Lord Tyrawley and by Colonel Charles Knox.

The folly appears to have been built during the late 18th Century.

You can also enjoy the wonderful beaches of this area, as well as migration birdwatching at Kilcummin Head.

From Castlereagh to Rathfran, a Golden 5K – Sources

Genealogical Memoirs of John Knox and of the Family of Knox; Rev. Charles Rogers; The Grampian Club, London, 1879.