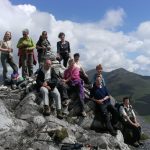 I have been guiding French groups around Connemara and into the Connemara National Park for a few years now. More than anywhere else, this is the part of Ireland the French come to see. Connemara is known to them through the medium of film, but mostly thanks to one famous song from the 1970s. If you mention the title of the Michel Sardou song, ‘Les Lacs du Connemara’, to French people over a certain age, many will be able to ream off the lyrics to you without difficulty.

There is unquestionably something magical about Connemara – its mix of water, bog and stone. It is at once a land drowned in hundreds of small lakes and damp bog, yet one of mountains with bare exposed stony tops. While our lovely Mayo mountains are almost always bog covered right to the very peak, the Twelve Bens mountain range of Connemara have been stripped of turf and soil, exposing their naked shining quartzite bodies. Wonderful mountains.

Connemara has its pretty little National Park – Ireland’s smallest – which is a kind of picture-postcard representation of the greater landscape all around. Boasting the nice hike up Diamond Hill (count 2.5 hours up and down), the park in Letterfrack is well worth a visit and is perfectly child-friendly, with shorter, more leisurely looped trails around the hub that is its visitors’ centre. Don’t miss the gorgeous short walk below the centre (green nature trail), which is a delight at only 500m long or so and is best experienced during spring when its wild garlic is in bloom. The smell is wonderful.

Of course, in near proximity to the National Park are the attractions of Kylemore Abbey with its Victorian walled garden and the lively town of Clifden. A little further afield is beautiful Leenane, situated on the Killary – Ireland’s only true fjord – and the magnificent Inagh Valley. To the south on the coast of Galway Bay lies Roundstone, one of Ireland’s prettiest little villages.