Last week, at the first Mayo Walking Seminar, held in West Mayo’s lovely Mulranny Park Hotel, I was speaking on hillwalking and the Nephin Beg Mountain Range. I used the opportunity to present my dream of a world-class 100 km walking and cycling loop in Mayo.

The loop, which I called the “Nephin Beg Mountains Loop” would encircle the mountains of Northwest Mayo and bring the walker or cyclist along rivers and small bog lakes, through blanket bog and by the seashore. Even better, at four points, there would be the opportunity for cyclists and long distance walkers to head off on spurs leaving the central loop. One would head towards Ballycastle, The Céide Fields and the north Mayo coastline. A second would branch off towards Belmullet and The Mullet peninsula, while the third would bring the visitor west to Achill Island. Finally, the fourth branch from the loop would go south, to the tourist hot-spots of Westport and Croagh Patrick.

Even better, The Bangor Trail (for walkers only) would bisect the 100 km loop straight down the middle, giving serious walkers another choice.

Not all walkers are in to hillwalking. A lot of this low-level loop is already in place. The new Great Western Greenway cycleway and walking trail, built on the old dismantled Westport to Achill railway line, makes up some 18 km of the 100 envisaged. The Western Way national waymarked walking trail meanders for some 25 km north of Newport into the wilderness and is hugely underutilised and neglected. There are already plans afoot to extend the Greenway northwards from Mulranny, in the general direction of Belmullet and Bangor Erris.

What I am calling for that is new consists of two parts. First, a modest 3 km stretch needs building to take the Western Way off-road in its entirety in this area. That’s hardly a big ask, as the land to be crossed is either Coillte or Bord na Móna owned. The second section would be around 6 or 7 km long, along the northern border of my Loop. Again, not a major task, with the land once again being mostly in Coillte hands.

While the new Greenway is nice, it is nowhere near international quality in length or variety of scenery. This “Nephin Beg Mountains Loop” most certainly would be.

Here is my aspirational map of the finished product. I think it can and should be done. What do you think ?

The solid red lines represent already existing tracks and trails. The dot-dash lines are what I am putting forward here. 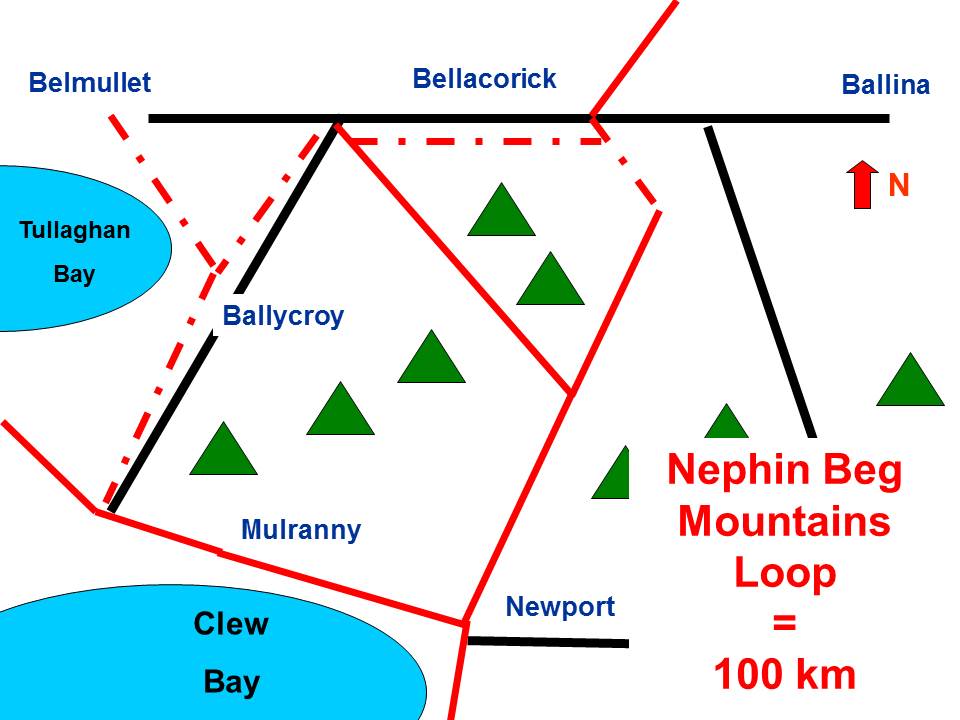